1. How much is the planet heating up?

As of February 2016, the Earth has warmed about 1.8 degrees Fahrenheit since 1880, when records began at a global scale. That figure includes the surface of the ocean. The warming is greater over land, and greater still in the Arctic and parts of Antarctica, but there is very little warming in the tropics.

Since pre-industrial times the CO2 level has increased from 280 ppm to 405 ppm, an increase of about 45%, and we know that for every doubling of CO2 temperatures will rise about 1.6 degrees F unless other factors dominate, such as positive or negative temperature feedbacks.

Al Gore saw the charts, and got so alarmed that he wrote “Earth in the balance.” What he didn’t take into account was that the major rise in temperature was not due to the increasing CO2, but the loss of albedo when the ice melted. CO2 played a supporting role, a lagging one. Then, around 9000 years ago temperatures stopped rising, CO2 levels stabilized and we entered a period of relative stability. What happened?

The albedo came back, this time in the form of increasing clouds. Once the oceans got warmer and stabilized, there was enough water vapor in the air to make more clouds, and so stabilize temperature. Since then temperatures have been on a slow decline, and the trend was accelerating until the ” little ice age”. There were 3 notable warming periods, the Minoan, the Roman, and the Medieval warming period.

During the Roman warm period wine grapes were grown almost up to the Hadrian Wall. It is well documented, and in Northhamptonshire, England there were at least 9 flourishing wineries..

The Roman Northamptonshire wine
was good, not excessively fine.
So it just goes to show
that Al Gore does not know
of Climate Change past, that’s my line.

The the dark ages came and grapes no longer ripened in England. During the

Medieval Warm Period there was at least one cheese farm on Greenland “Gården under sanden”, abandoned as the glaciers regrew, starting the “Little Ice Age”. During the little ice age it got so cold, that in Jan 1658 the Swedish army crossed the Great Belt of Denmark over

ice, canons and all,  and sacked Copenhagen. We are still recovering from the “little ice age.” 2016 may have been a warm year, but most years since the ice age were warmer. See Chart. 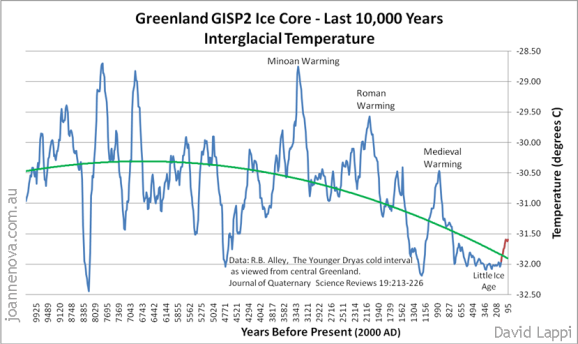 We are still in the sweet spot of a remarkable stable Climate, only more CO2 will save us from a new Ice Age. We are not yet back to the Medieval warming period, much less the Roman and even less the Minoan. A doubling of CO2 will not get us back to the Roman warming period since the negative feedback from clouds will dominate and limit the temperature rise.

As to the fear mongering claim that “The heat accumulating in the Earth because of human emissions is roughly equal to the heat that would be released by 400,000 Hiroshima atomic bombs exploding across the planet every day,” I can only say that the energy from the sun is equivalent to over 25oo Hiroshima bombs per second, or about 540 times as much as comes from human energy production, about 0.2%, hardly anything to worry about.

Answers to Question 2. How much trouble are we in?

Answers to Question 3. Is there anything I can do?

Answers to Question 5. Will reducing meat in my diet help the climate?

Answers to Question 7. Will a tech breakthrough help us?

Answers to Question 8. How much will the seas rise?

Answers to Question 9. Are the predictions reliable?

Answers to Question 10. Why do people question climate change?

Answers to Question 11. Is crazy weather tied to climate change?

Answers to Question 12. Will anyone benefit from global warming?

Answers to Question 13. Is there any reason for hope?

Answers to Question 14. How does agriculture affect climate change?

Answers to Question 15. Will the seas rise evenly across the planet?

Answers to Question 16. Is it really all about carbon?