At a Hillary Clinton Town hall meeting  Teresa O’Donnell of Powell, Ohio had the following question: “I voted for Obama, but then my health insurance skyrocketed from $490 a month to $1,081 a month for a family of four. I know Obama told us that we’d be paying a little more. But doubling – over doubling – my health insurance cost has not been a little more. It has been difficult to come up with that kind of payment every month. I would like to vote Democratic, but it’s costing me a lot of money. And I’m just wondering if Democrats really realize how difficult it’s been on working class Americans to finance ObamaCare?”

Hillary tried to extol the virtues of Obamacare and got nowhere, so she finally ended the conversation with: “And one thing that I would like you to do, and I’m not saying it’s going to make a difference, but I would like you to just go shopping on that (the Ohio) exchange.”

This adds one more verse to the Hillary Nursery rhyme

“It’s none of your business, for  I am the queen.”

“I know best, so obey and pay up, you gadfly!

Obama can no longer crow

Wait for months is the norm

for some it is six feet below…..

Remember that Obama was going to reform VA and make it a model of health care so that when Obamacare failed he could point to the perfect system and transition everybody into “People’s Healthcare Administration”.

This is a statement from Obama in 2008:
“Make the VA a leader of national health care reform. … This includes efforts to improve electronic records interoperability, expand effectiveness research, promote wellness programs, and instill more accountability for performance and quality improvement initiatives.”

Sources:”Fulfilling a Sacred Trust with our Veterans”  Click on (original link)  and see what happens. This is what you get when you browse https://www.barackobama.com/pdf/VeteransFactSheet.pdf/

Well, at least they claim healthcare.gov is working. That should encourage our veterans.

I’ll be lost without health-care, Go without I would not dare

My old plans don’t have a prayer, too good to be deemed fair.

Cost is more than doubled too; Gruber said: “That’s good for you”,

And his  attitude comes through: “You are stupid, I fooled you”.

Crony-ism to the sky, Obama gave his reason why:

Common sense was never there.  But Obama doesn’t care.

t is today six years since the surprise nomination of Sarah Palin for Vice President. Not knowing anything about her except that she had just successfully negotiated a contract for building a natural gas pipeline from Alaska to the lower 48 I watched with interest her debut on the national stage. And there she came, complete with a baby, prominently displayed front and center. Suddenly I saw before my eyes the quote from Isaiah 11:6 (NIV + Septuagint)
The wolf will live with the lamb,
the leopard will lie down with the goat,
the calf and the lion will feed together;
and a little child will lead them.
I searched the internet for the importance of this baby. It was already buzzing with information. One of the first quotes I came across was that “she refused proper prenatal care”. This was when I found out this baby had Down Syndrome. Since we are talking health care reform, are we going to force everybody to submit to “proper prenatal care”? I do not know much about this except that three people I know had tested positive for having a baby with Down syndrome. All three chose to carry the baby to term, and gave birth to perfectly normal babies. One of the babies is now in middle school, one is in college, and one, my niece, just graduated from Med School.

Liberals. It is high time to rethink your opinion of Sarah Palin. The country needs her and women like her more than ever to restore out land. She really does understand how the world works and is not swayed by criticism, assault, arson, life-threats, flattery, money and power.

The official website: http://www.whitehouse.gov/health-care-meeting/proposal/titlei/keepit  still comes up ( as of Nov 10 2013, 4 P.M.) with this blatant lie:

It seems that the whole Obama presidency is built on lies.

What about all the people satisfied with their policy that just got their insurance canceled due to changes mandated by “The affordable healthcare act?” 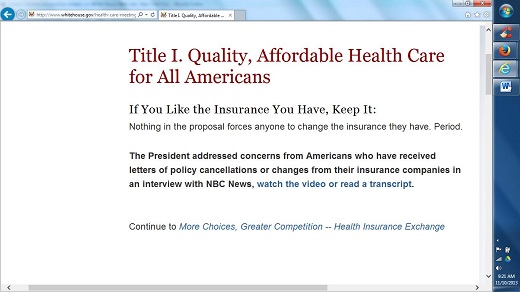 How prevaricators get by

What’s said in the past, they deny.

Yet this truth still applies: 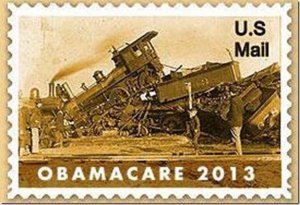 I’ll be lost without health-care, Go without I would not dare

My old plans don’t have a prayer, too good to be deemed fair.

Cost is more than doubled too. No, Sebelius, that won’t do.

But her attitude comes through: “I do not work for you”.

Crony-ism to the sky, Obama gave his reason why:

Common sense was never there.  But Obama doesn’t care.

.
On Obamacare IPAB
Howard Dean, Sarah Palin agree.
Once “the lie of the year” *
Those “Death Panels” we fear,
They will fail to the utmost degree.
.
In a July s28, 2013 Wall Street Journal op-ed former Governor of Vermont Howard Dean said:

“The Independent Payment Advisory Board is a “health-care rationing body,” which has the power to set rates for certain procedures for Medicare and determine which procedures and drugs will be covered.

The IPAB will be able to stop certain treatments its members do not favor by simply setting rates to levels where no doctor or hospital will perform them.”

While Dean agrees that costs need to be contained, he says the mechanism that will run the IPAB — known as rate-setting — has a 40-year track record of failure.

Former Governor of Alaska Sarah Palin had the same opinion that it is a rationing body and the IPAB will decide who will die and who will live, strictly by bureaucratic regulation, not in a doctor patient relationship. She therefore dubbed them the IPAB “Death Panel.”

A winner in our “Lie of the Year” contest!
Of all the falsehoods and distortions in the political discourse this year, one stood out from the rest.
“Death panels.”
The claim set political debate afire when it was made in August, raising issues from the role of government in health care to the bounds of acceptable political discussion. In a nod to the way technology has transformed politics, the statement wasn’t made in an interview or a television ad. Sarah Palin posted it on her Facebook page.

Can people get cancer from taking the pill?

Both they and their partners most surely will.

Obamacare soon will go in for the kill!

Researchers recently studied the link between prostate cancer incidence and mortality and the use of birth control pills. The authors of the study, published in 2011 in the British Medical Journal, hypothesized that birth control pills may lead to environmental estrogen contamination, causing increased rates of prostate illness in men.

Other forms of contraception (IUDs, condoms, or vaginal barriers) were not correlated with prostate cancer incidence or mortality. The scientists concluded: “A significant association between oral contraceptives and prostate cancer has been shown.”

From my days of Chromatography I was made aware that an electron capture detector does not react to natural estrogen, but synthetic estrogen in all its forms do. Natural and synthetic estrogen does not act the same in the body, and unintended consequences are therefore to be expected.

The most telling moment of the debate in Florida Jan 26 2012 was Romney’s response to Rick Santorum’s eloquent explanation of Obamacare’s importance to the GOP’s strategy in the general election and why giving Romney the nomination would be tantamount to surrendering the high ground on health reform: “Folks, we can’t give this issue away in this election. It is about fundamental freedom.” The former Massachusetts governor responded with the usual rote talking points, which Santorum vehemently rejected. Romney then uttered the most revealing words of the debate: “First of all, it’s not worth getting angry about.”

“First of all, it’s not worth getting angry about.”

Replaced by a serfdom.

Force the Catholic healthcare to close? Vote them out!

Survival of fittest, no place for the meek.

Be sure to be strong

For it won’t be long

To keep the plan solvent, we weed out the weak.