(The reasons keep piling up. A more updated 25 reasons are found here ).

Eleven reasons to switch to Thorium based Nuclear Power generation.

1. Cheap and unlimited raw material. There is enough Thorium around for many millennia, and not only that, it is a byproduct of mining heavy metals and rare earth metals The price is the cost of refining it, about $40/Kg. 2. 0.01% waste products compared to a Uranium fast breeder. The Thorium process has a much higher efficiency in fission than  the Uranium process. See the figure below. 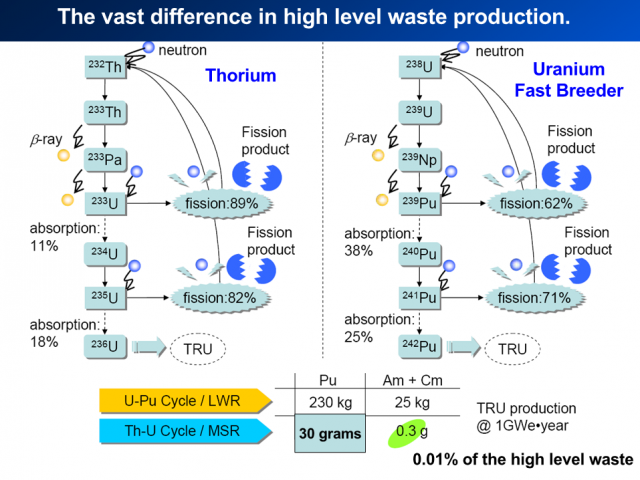 Note the Plutonium in the Thorium cycle is Pu-238, which is in high demand. 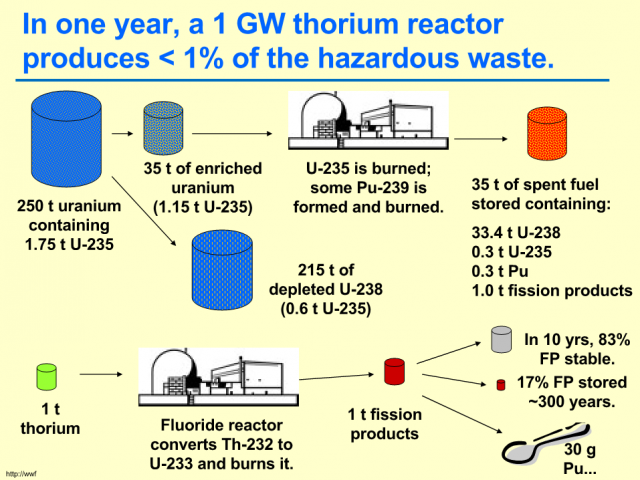 3. Radioactive waste lasts max 300 years instead of a million years. Initially a Thorium reactor produces as much radioactivity as other nuclear reactors, since that is what generates the heat by converting mass to heat, but the decay products have a much shorter half-life. See the figure below. 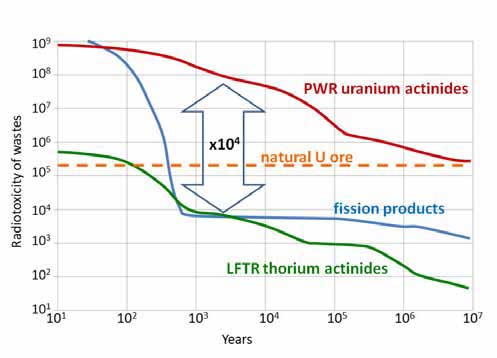 4. Can deplete some of the existing radioactive waste and nuclear weapons stockpiles. Thorenco LLC is developing a special reactor to purify spent nuclear fuel. This thorium converter reactor is designed to transmute and to “fission away” the heavy transuranic metals, the “nuclear waste” that the world’s fleet of 441+ light water reactors produce in spent fuel. This waste is about 4-5% of the volume of the fuel rods. It is composed of neptunium, plutonium, americium and curium. These transuranic elements are radiotoxic for very long periods of time. Thorenco’s technology fissions the plutonium and irradiates the transuranics causing the heavy metal elements to fission or to become lighter elements with much shorter decay periods. The thorium fuel cycle provides the neutrons as does the reactor grade plutonium. Nuclear power becomes more sustainable because the volume of the spent fuel from the uranium plutonium cycle is reduced by up to 95%. More importantly, the storage time for the residue from the recycled thorium fuel is materially reduced. This will have to be stored for less than 1% of the time needed for the storage of the untreated transuranics.

5. Produces Plutonium-238 needed for space exploration. WASHINGTON — The U.S. Senate gave final passage to an energy and water spending bill Oct. 15  2009 that denies President Barack Obama’s request for $30 million for the Department of Energy to restart production of plutonium-238 (pu-238) for NASA deep space missions. The House of Representatives originally approved $10 million of Obama’s pu-238 request for next year, but ultimately adopted the Senate’s position before voting Oct. 1 to approve the conference report on the 2010 Energy-Water Appropriations bill (H.R. 3183). The bill now heads to Obama, who is expected to sign it. NASA relies on pu-238 to power long-lasting spacecraft batteries that transform heat into electricity. With foreign and domestic supplies dwindling, NASA officials are worried the shortage will prevent the agency from sending spacecraft to the outer planets and other destinations where sunlight is scarce. Thorium reactors produce PU-238 as a “free” byproduct.

6. Does not produce Plutonium239 and higher used in nuclear bombs. The higher Plutonium isotopes are about as nasty as they get, and need expensive protection against terror attacks, and need to be stored for a very long time.

7. Produces isotopes that helps cure certain cancers. For decades, medical researchers have sought treatments for cancer. Now, Alpha Particle Immunotherapy offers a promising treatment for many forms of cancer, and perhaps a cure. Unfortunately, the most promising alpha-emitting medical isotopes, actinium-225 and its daughter, bismuth-213, are not available in sufficient quantity to support current research, much less therapeutic use. In fact, there are only three sources in the world that largely “milk” these isotopes from less than 2 grams of thorium source material. Additional supplies were not forthcoming. Fortunately, scientists and engineers at Idaho National Laboratory identified 40-year-old reactor fuel stored at the lab as a substantial untapped resource and developed Medical Actinium for Therapeutic Treatment, or MATT, which consists of two innovative processes (MATT-CAR and MATT-BAR) to recover this valuable medical isotope.

8. Earthquake safe. Thorium reactors have a very simple and compact design where gravity is the only thing needed to stop the nuclear reaction. Conventional Nuclear reactors depend on external power to shut down after a SCRAM, where poison rods fall down to halt the reaction.  The next figure shows the concept of a Thorium reactor. The idea is to empty the fissile U-233 core through gravity alone. Since the fuel is already molten, it can run out like pig-iron into cooling heat exchangers with  water supplied thru gravity alone. 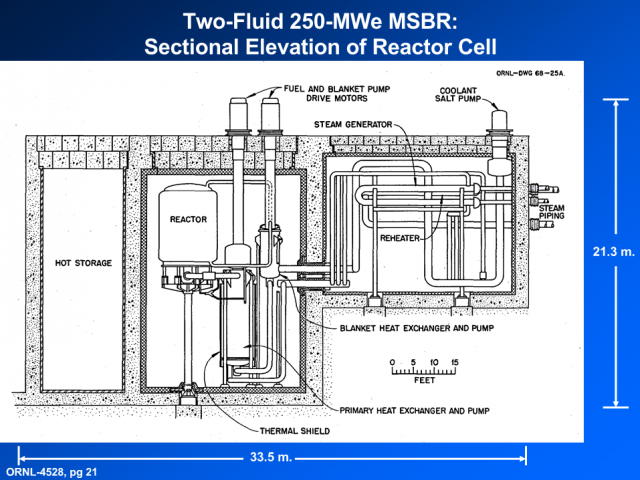 As we can see the reactor hardened structure is compact, and can be completely earthquake and tsunami proof. What can be sheared off are the steam pipes and external power, but the shutdown can complete without additional power.

9. No risk for a meltdown, the fuel is already molten. The fuel in a Thorium reactor is U-233 in the form of UraniumFluoride (UF4) salt that also contains Lithium and Beryllium, in its molten form it has a very low vapor pressure. The salt flows easily through the heat exchangers and the separators. The salt is very toxic, but it is completely sealed.

10. Very high negative temperature coefficient leading to a safe control. This is another beauty of the molten salt design. The temperature coefficient is highly negative, leading to a safe design with simple and consistent feedback. What does that mean?  It means that if temperature in the core rises, the efficiency of the reaction goes down, leading to less heat generated. There is no risk for a thermal runaway. In contrast, Chernobyl used graphite moderated Uranium , and it suffered a thermal runaway as the operators bypassed three safety circuits trying to capture the last remaining power during a normal shut-down. The reactor splat, the graphite caught fire and the rest is history. Five days later two nuclear installations in Sweden shut down their reactors due to excessive radiation, but it took a while before they could figure out what had happened. First then did the Soviets confess there had been an accident.

11. Atmospheric pressure operating conditions, no risk for explosions. Materials subjected to high radiation tend to get brittle or soften up. Thorium reactors operate under atmospheric conditions so the choice of materials that can withstand both high temperatures and high radiation is much greater, leading to a superior and less expensive design.  There is no high pressure gas buildup and the separation stage can be greatly simplified.

Many of the pictures are from a slide presentation given by David Archibald in Melbourne Feb 5 2011. He posted it “for the benefit of all” which I have interpreted as waving the copyright of the pictures

18 thoughts on “Eleven reasons to switch to Thorium based Nuclear Power generation.”