(The reasons keep piling up. A more updated 25 reasons are found here ).

Eleven more reasons to switch to Thorium as Nuclear fuel. The first eleven are found in https://lenbilen.com/2012/02/15/eleven-reasons-to-switch-to-thorium-based-nuclear-power-generation/  I am following the events at Fukushima Nuclear Power plants with great interest. How ironic that the greatest risk is with the spent fuel, not with the inability to shut down the working units. The spent fuel issue is the real Achilles’ heel of the Nuclear Power Industry. Thorium power works differently as nearly all fuel gets consumed as it is generated. When the process shuts down, that is it. Only the radioactivity that is en route so to say will have to be accounted for, not everything generated thus far in the process. The difference is about 10000 to one in the size of the problem. Time to switch over to Thorium.

12.  Scales beautifully from small portable generators to full size power plants. One of the first applications was as an airborne nuclear reactor. Granted this was not a Thorium breeder reactor, but it proves nuclear reactors can be made lightweight. Thorium reactor may be made even lighter as long as they are not of the breeder type.

13. No need for evacuation zones, can be placed near urban areas. Thorium reactors operate at atmospheric pressure and have a very high negative temperature coefficient, so there is no risk for a boil-over. They are easily made earthquake-safe since no pressure vessel is needed.

15. Lessens the need for an expanded national grid. The National Electric grid is at the breaking point. It needs to be expanded, but neighborhood resistance is building in many areas where they need an expansion the most. The grid is also sensitive to terrorism activities. 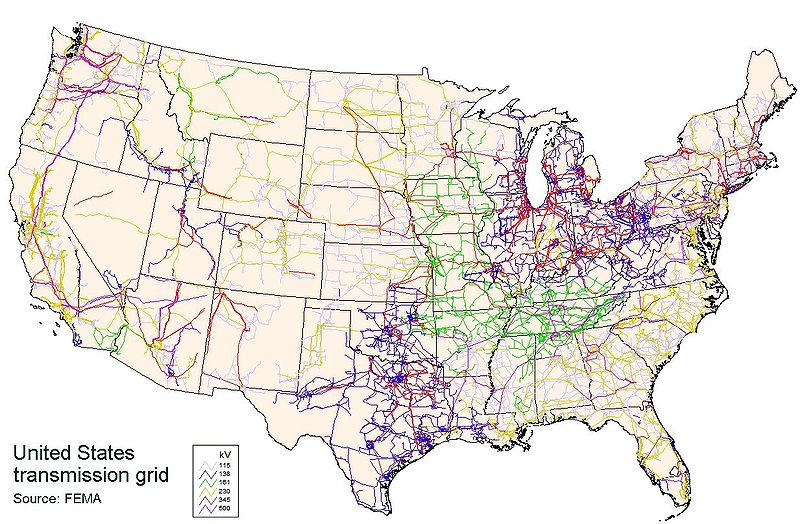 As we can see the national grid is extensive, and under constant strain. A way to lessen the dependency on the national grid is to sprinkle it with many small to medium sized Thorium Nuclear Power generators.  They can be placed on barges in rivers and along the coast, giving the grid maximum flexibility to respond in  case of an emergency.

16. Russia has a Thorium program 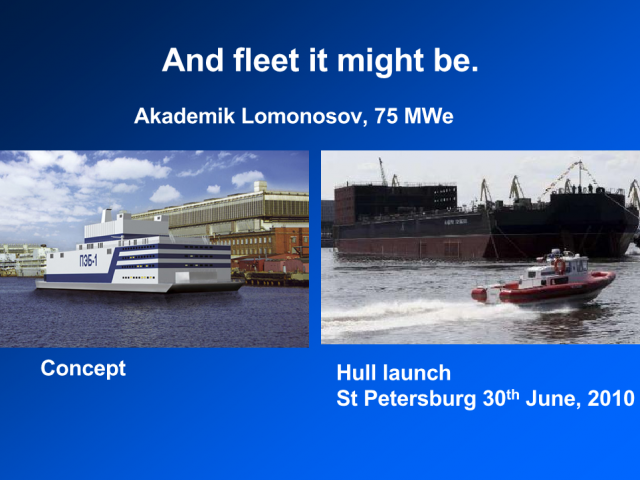 This is a self-contained Thorium Nuclear Reactor on a barge. Coolant readily available. Hoist it a couple of cables and the town will have all the power it needs.

17. China is starting up a Thorium program. The People’s Republic of China has initiated a research and development project in thorium molten-salt reactor technology, it was announced in the Chinese Academy of Sciences (CAS) annual conference on Tuesday, January 25. An article in the Wenhui News followed on Wednesday. Chinese researchers also announced this development on the Energy from Thorium Discussion Forum. Led by Dr. Jiang Mianheng, a graduate of Drexel University in electrical engineering, the thorium MSR efforts aims not only to develop the technology but to secure intellectual property rights to its implementation. This may be one of the reasons that the Chinese have not joined the international Gen-IV effort for MSR development, since part of that involves technology exchange. Neither the US nor Russia have joined the MSR Gen-IV effort either. A Chinese delegation led by Dr. Jiang travelled to Oak Ridge National Lab last fall to learn more about MSR technology and told lab leadership of their plans to develop a thorium-fueled MSR.The Chinese also recognize that a thorium-fueled MSR is best run with uranium-233 fuel, which inevitably contains impurities (uranium-232 and its decay products) that preclude its use in nuclear weapons. Operating an MSR on the “pure” fuel cycle of thorium and uranium-233 means that a breakeven conversion ratio can be achieved, and after being started on uranium-233, only thorium is required for indefinite operation and power generation.

18. India has an active Thorium program. • India has a flourishing and largely indigenous nuclear power program and expects to have 20,000 MWe nuclear capacity on line by 2020 and 63,000 MWe by 2032.  It aims to supply 25% of electricity from nuclear power by 2050. • Because India is outside the Nuclear Non-Proliferation Treaty due to its weapons program, it was for 34 years largely excluded from trade in nuclear plant or materials, which has hampered its development of civil nuclear energy until 2009. • Due to these trade bans and lack of indigenous uranium, India has uniquely been developing a nuclear fuel cycle to exploit its reserves of thorium. • Now, foreign technology and fuel are expected to boost India’s nuclear power plans considerably.  All plants will have high indigenous engineering content. • India has a vision of becoming a world leader in nuclear technology due to its expertise in fast reactors and thorium fuel cycle. • India’s Kakrapar-1 reactor is the world’s first reactor which uses thorium rather than depleted uranium to achieve power flattening across the reactor core. India, which has about 25% of the world’s thorium reserves, is developing a 300 MW prototype of a thorium-based Advanced Heavy Water Reactor (AHWR). The prototype is expected to be fully operational by 2011, following which five more reactors will be constructed. Considered to be a global leader in thorium-based fuel, India’s new thorium reactor is a fast-breeder reactor and uses a plutonium core rather than an accelerator to produce neutrons. As accelerator-based systems can operate at sub-criticality they could be developed too, but that would require more research. India currently envisages meeting 30% of its electricity demand through thorium-based reactors by 2050.

19.Lawrence Livermore Laboratories is developing a small portable self-contained Thorium reactor capable of being carried on a low-bed trailer. A Democratic member of the United States House of Congress (Joseph Sestak) in 2010 added funding for research and development for a reactor that could use thorium as fuel and fit on a destroyer-sized ship.  Lawrence Livermore national laboratories are currently in the process of designing such a self-contained (3 meters by 15 meters) thorium reactor. Called SSTAR (Small, Sealed, Transportable, Autonomous Reactor), this next-generation reactor will produce 10 to 100 megawatts electric and can be safely transported via ship or truck.  The first units are expected to arrive in 2015, be tamper resistant, passively failsafe and have a operative life of 30+ years. 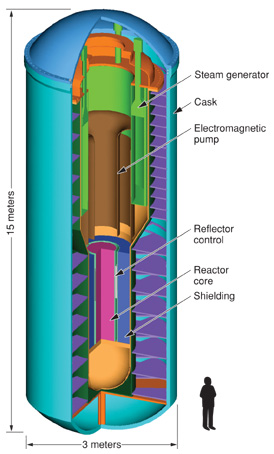 20. The need for a Yucca Mountain nuclear storage facility will eventually go away. Since Thorium consumes the fissile material as it is getting created, the need for a long term storage facility of the Yucca Mountain type will eventually go away. In remote locations there can be built Thorium Nuclear Power generators that consume spent material from other nuclear processes. The need to do it in remote locations is the hazard of the already existing nuclear wastes. It should be possible to reduce the existing stockpile of nuclear wastes and nuclear bombs by about 90% and make electricity in the process. The cost to do this is higher than the normal process due to the additional cost of security.

21. Produces electricity at a cost of about 4 c/kWh. 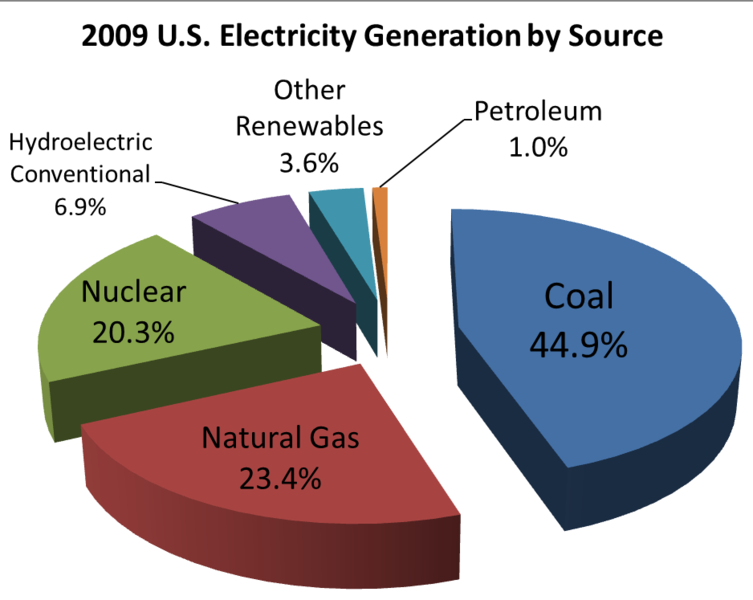 The cost to produce electricity with Thorium generators should be about 40% less than Advanced Nuclear and about 30 % less than from Coal (with scrubbers). Solar generation is about 4 times more expensive (without subsidies) Wind power is cheaper when the wind blows, but the generation capacity has to be there even when the wind doesn’t blow, so the only gain from wind power is to lessen the mining or extraction of carbon.  Even if we double the renewable power we will only go from 3.6% to 7.2% of total energy needed.  Hydroelectric  power is for all practical purpose maxed out, so all future increase must come from Coal, Natural Gas, Petroleum or Nuclear. Thorium powered Nuclear Generators is the way to go.

22. Save $500 Million and use the 1600 Kg U-233 we have to start Thorium Reactors! Here is an idea on how to save money that comes from the Thorium community on how to save more than 500 million dollars in the federal budget and energy, scientific and medical benefits as a bonus. The situation: The Department of Energy has 1400 Kg Uranium-233 stored at Oak Ridge National Lab. They are in process of downgrading it to natural uranium by downblending it with depleted uranium. They need 200 tons of depleted uranium to do the task, rendering it unusable for anything. The decommissioning was approved in 2003 and to date 130 million has been spent, but the actual downblending hasn’t even started yet.

Proposal 1. Sell it to India which has an active Thorium nuclear reactor program. There it can be used as a fuel producing an estimated 600 million dollars worth of electricity. Sarah Palin is going to India to be the keynote speaker at the India Today Conclave, a good forum to publicize this and other potential cooperation in future of nuclear power generation.

Proposal 2. Stop the decommissioning immediately. Build our own Thorium Nuclear Reactor and over time get 600 million dollars worth of electric power and 45g of Plutonium-238.

7 thoughts on “Eleven more reasons to switch to Thorium as Nuclear fuel.”