The natural life cycle of forests in the dry part of western United States is rejuvenation and growth, interrupted by forest fires. In fact, the lodgepole pine requires a fire to release the seeds in the cones. Without the fire they will not  germinate. Forest fires every generation is the normal occurrence for the dry, western forests. Then in the 1930’s, to stop the wild fires they started forest management in earnest, dead trees removed and underbrush cleared, and wildfires were cut by over 90%. They also harvested a lot of good, mature trees, but that is a different story. The chart below tell the facts: 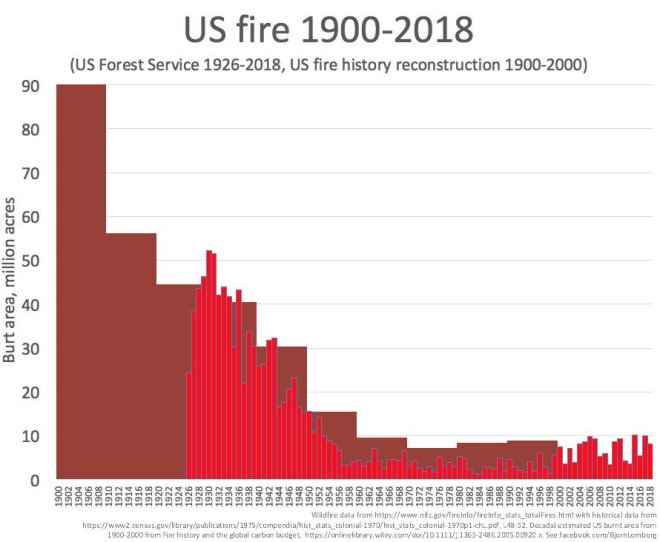 Forest fires were very few from the late 50’s to late 90’s. But with forest management comes a price. Nature can no longer support as many birds and animals as before, and some species were already vulnerable and close to extinction. So, partly due to the power of the Sierra Club and other organizations it was decided to return nature to its original state as much as possible. That would be fine except we no longer live in the 19’th century, when California had less than a million inhabitants. It now has 40 million inhabitants and use up all the water that rains on it and more. People have to live somewhere, so they make beautiful settlements in tinder dry forests. This is the problem out west. You can not have settlements in an unmanaged forest and get away with it, the fire will get you sooner or later. The solution is to set aside some forest lands for natural growth, but only where nobody lives and manage all other forests. Climate change has very little to do with western forest fires, there has always been years of droughts, interrupted by torrential rains. As it was in biblical times in Israel and Egypt, so it is in the American west.