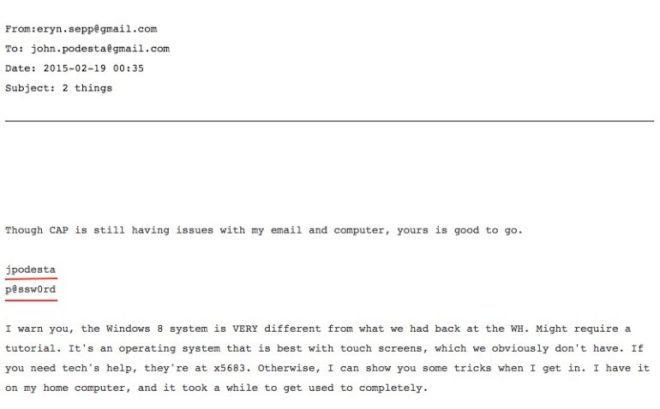 must be Russia, you see.

Did this have election impact?

The Russians are good hackers. They hack and sell passwords, hack and demand ransom to restore computers, hack for industrial and military espionage, I could go on. They have been doing this  since the internet started. The lower level hacking, such as Podesta’s e-mails, is usually done at the cottage industry level, the more sophisticated espionage is controlled centrally.

But Russia is not the only hacker. China is much more prolific, at least as sophisticated, and has the goods on all U.S. citizens (more than 20 million) with top secret or secret clearance, and all government employees.

Other actors are North Korea, Iran, Nigeria, and many US allies.

Are we innocent? Hardly. Here is a snapshot of one day in the world of cyber attacks

When all these hackings were starting the Bush Administration did very little to combat it. The Obama administration did even less as hackings grew in numbers and level of sophistication. By doing nothing, he gave away trillions of dollars worth of intellectual property, and jeopardized our security.

Now, after losing the election Obama wakes up and expels some some Russian diplomats from two compounds that have been doing mostly industrial and military espionage since the 70’s.

Then you went to London and said “If the U.K. voted to leave the E.U, Britain would be left back in the queue”. Brexit won convincingly.

You campaigned hard for Hillary Clinton and ridiculed Trump as much as you could. Trump won in an electoral landslide.

Now you think you have found the culprit: Putin’s Russia.

At least Trump is forming a group to report within 90 days how to handle cyber security in his administration and for the whole country. It won’t be easy or cheap, but it must be done to preserve freedom. 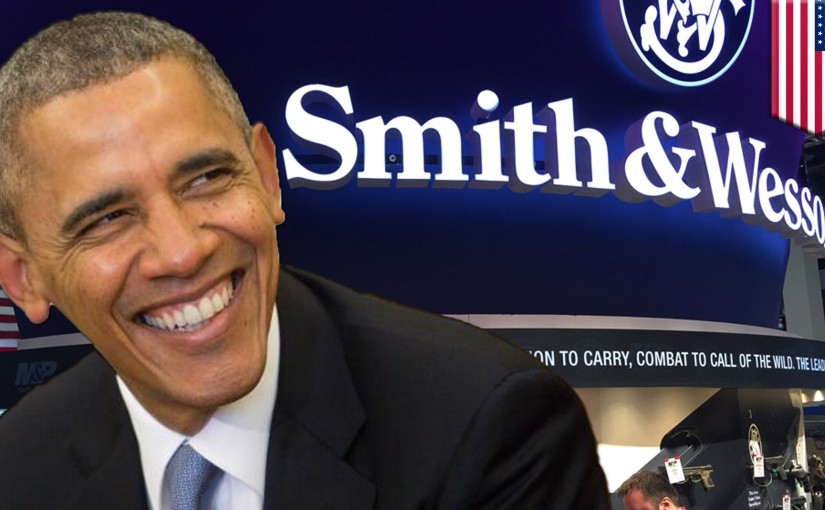 Obama has a reliable record of failures. When he advocates a certain policy and resorts to threats, the opposite occurs.

The Obama administration was going all out to see that Israeli Prime Minister Benjamin Netanyahu was defeated in the 2015 Israeli election, but the campaign of veiled threats and anonymous leaks backfired: Instead of sinking in the polls, Netanyahu rose steadily, and after someone from Obama’s “inner circle” threatened  that if Israel reelected Netanyahy they would “pay a price”, Netanyahu won easily.

But nowhere is his negative charisma more evident than in the case of gun control. Every tragedy, from the shooting of Gabrielle Giffords, to the Orlando Massacre the answer was always the same: Gun control. The reaction was always the opposite: A spike in gun sales. This stock chart of Smith and Wesson proves the point:

At the time of the election of Obama the stock hovered around 2. It is now around 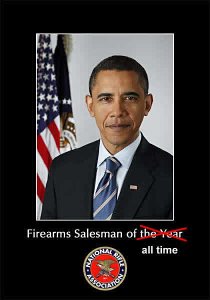 25, a more than tenfold increase!

Bottom: A chart of gun sales:

This leads to verse 89 of the Obama impeachment song (as if sung by President Barack Hussein Obama to the tune of “Please release me, let me go”)

so terrorists go free and clear.

Smith and Wesson clap and cheer,

I am their top salesman of the year. 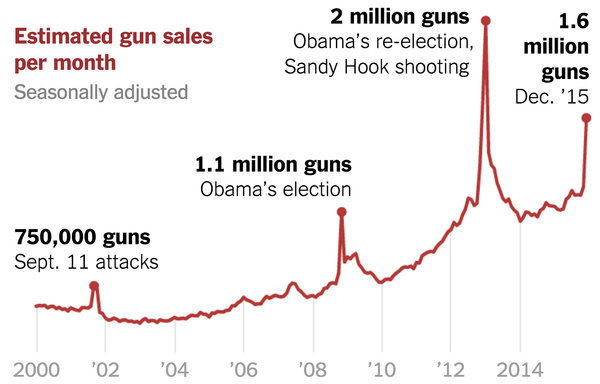 President Obama visited Britain recently and advocated strongly for Britain to stay in the EU, warning that if they left they would be at “the back of the queue” for a U.S. trade deal. According to polls taken just before and just after Obama’s visit, that recommendation alone lead to a 3 to 5 point uptick in favor of Brexit.

The Brits did bid EU adieu,

and went “to the back of the queue.”

As Obama chimed in

all polls did go widely askew.

The results are in: After a long night of vote counting, the final results have been issued: 51.9% of voters chose to leave the EU, while 48.1% wanted to remain.

The exit margin is equal to the Obama visit surge in Brexit polls.

Item: EU bureaucrats hold off banning high power small appliances such as electric teakettles until just after the British referendum to stay in or leave EU.

T’was the last straw for Brits,

so they did call it quits.

Update. The results are in: After a long night of vote counting, the final results have been issued: 51.9% of voters chose to leave the EU, while 48.1% wanted to remain.

A Lady from Batley and Spen

As Labour MP voted in

But a man, filled with hate,

shot and stabbed, sealed her fate.

For what? She did wish to remain! 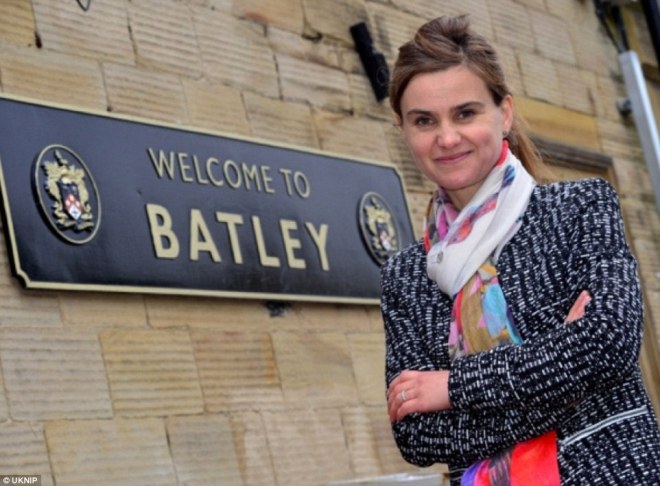 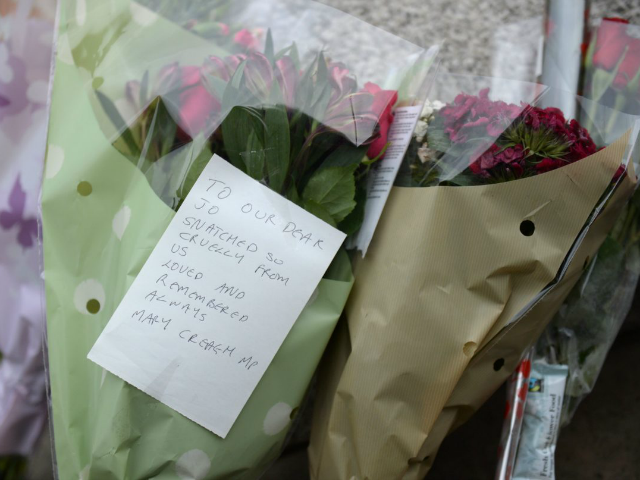 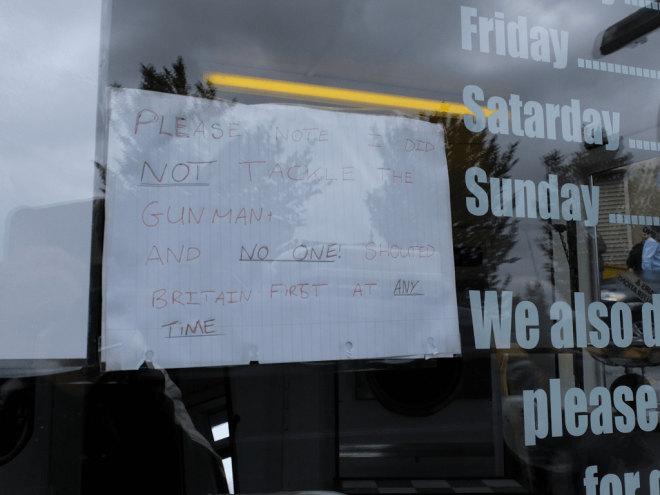 Secession is brewing in Britain

from EU they’ll vote to be quittin’

More than half to secede,

No wall, yet the handwriting written.

The headlines go from bad to worse for the UK and EU establishment as yet another new poll this weekend, by Opini 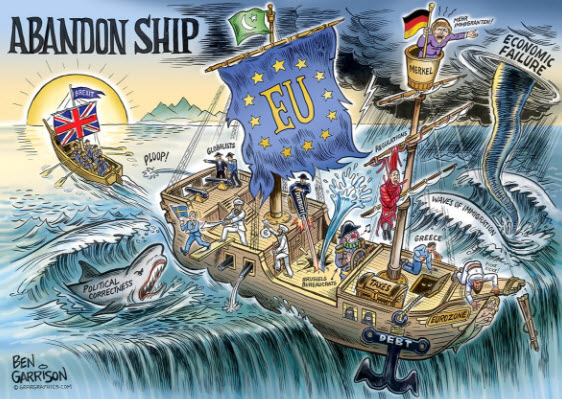 um, shows “Brexit” leading by a remarkable 19 points (52% chose to leave the EU against 33% choosing to keep the status quo). This result comes after 2 polls Friday night showing a 10-point lead for “leave” which sparked anxiety across markets. This surge in “leave” probability comes despite an additional 1.5 million voters having registered this week (which many expected to increase “remain” support). Further anger towards EU was exposed when former cabinet minister Iain Duncan Smith warned that seven new prisons will need to be built in the UK by 2030 to cope with the rising number of migrant criminals (presumedly due to ‘staying’ in the EU). With market anxiety rising, as One River’s CIO notes, if Brexit happens, gold will soar.

All major parties are campaigning for Britain to stay in the EU. Here is the Green Party reason: Caroline Lucas has  called on Green voters to back remaining in the EU on June 23rd, declaring the imminent vote a “climate referendum”.

Lucas, who is a board member of Britain Stronger in Europe and Another Europe is Possible, as well as the Green Party’s only MP, warned a vote for Brexit would undermine efforts to tackle climate change and build a greener economy.

“June 23rd is a climate referendum,” she said. “Leaving the EU could wreck our chances of playing a part in the fight against this existential threat – and hand the country to people who don’t even believe climate change is happening. But by staying as a member of the EU we can build on the progress already made in Paris earlier this year and continue making strides towards a fossil-free future.”

She reiterated her view the EU is in need of sweeping reform, but insisted it remained the “best hope we have when it comes to tackling climate change and protecting our environment”.

President Obama visited Britain recently and advocated strongly for Britain to stay in the EU, warning that if they left they would be at “the back of the queue” for a U.S. trade deal. According to polls taken just before and just after Obama’s visit, that recommendation alone lead to a 3 to 5 point uptick in favor of Brexit.

Opponents of Britain’s European Union membership have edged into the lead over the past two weeks, according to a YouGov poll which indicated President Barack Obama’s intervention failed to swing support behind “In” vote in a June 23 referendum. 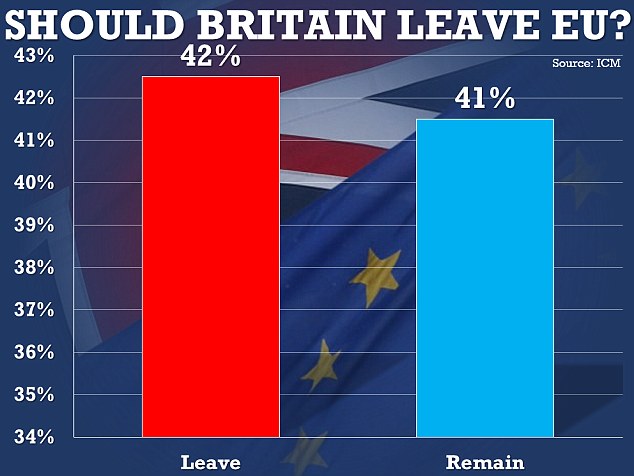 President Barack Obama on Friday April 22, warned Britain would be “in the back of the queue” for a trade deal with the United States if it dropped out of the EU, an unusually strong intervention into British politics that “In” campaigners welcomed. 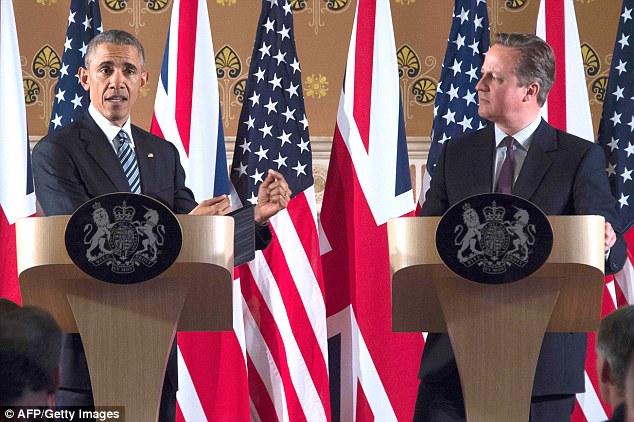 “Some have portrayed Obama’s intervention as backfiring – and this poll does suggest that Obama hasn’t given the remain team a boost at all,” Anthony Wells, director of political research at YouGov, said by telephone.

This leads to verse 85 of the Obama impeachment song (as if sung by President Barack Hussein Obama to the tune of “Please release me, let me go”)

I told Britons to stay in

All my threats were seen as spin,

I am but a washed-up, old has-been.