Russia has an active Thorium program

This is a self-contained Thorium Nuclear Reactor on a barge. Coolant readily available. Hoist it a couple of cables and the town to be serviced will have all the power it needs. This is especially useful in the Arctic. Russia is trying to establish Arctic domination, both commercially and militarily. They have over 30 ice breakers, some of them nuclear. U.S. has two, only one of which are operational.
Russia is also trying to commercialize hybrid fusion-fission reactors:
Nuclear Engineering International: 29 May 2018
Russia develops a fission-fusion hybrid reactor.
A new fission-fusion hybrid reactor will be assembled at Russia’s Kurchatov Institute by the end of 2018, Peter Khvostenko, scientific adviser of the Kurchatov complex on thermonuclear energy and plasma technologies, announced on 14 May. The physical start-up of the facility is scheduled for 2020.

The hybrid reactor combines the principles of thermonuclear and nuclear power – essentially a tokamak fusion reactor and a molten salt fission reactor. Neutrons produced in a small tokamak will be captured in a molten salt blanket located around tokamak. The facility will use Thorium as a fuel, which is cheaper and more abundant than uranium. Moreover, unlike a fusion reactor, a hybrid will not require super high temperatures to generate energy.

Hybrid reactors reduce the impact of the nuclear fuel cycle on the environment. The concept combines conventional fission processes and fusion reactor principles, comprising a fusion reactor core in combination with a subcritical fission reactor. The results of the fusion reaction, which would normally be absorbed by the cooling system of the reactor, would feed into the fission section, and sustain the fission process. Thorium in a molten salt blanket will enable breeding or uranium-233.

Some of the expected advantages include:

British explorer Pen Hadow and his crew have set sail from Alaska, in an attempt to become the first people ever to sail to the North Pole.

“With Arctic ice melting at an unprecedented rate, previously inaccessible waters are opening up, creating the potential for their planned 5,500 km (3,500 mile) journey for the first time in human history.”

How is the Arctic ice melting? Let us count the ways

It was very warm in the Arctic above the 80th latitude last winter. Late summer two hurricane strength storms broke up a lot of ice up and transported it south to areas where it was bound to melt. The ice area reached a new low, except for the year 2012, but the ice volume hit a new all time low on Sep 9 2016.

3 The ice mass on Greenland has grown more than 150 km3 above normal this season.

4. The average Arctic temperature above 80 degree latitude has already dipped below freezing.

5. The Arctic ice area will still decrease for another month or so since sea ice does not start forming until temperatures are -4 degree C, but the ice volume is near its minimum since snow season in the Arctic has already started, and new snow on ice stays, and fresh snow has a higher albedo than old, tired ice.

The North East Passage choke point Cape Chelyuskin is still blocked. That is one week later than last year and three weeks later than 2015

Pen Hadow and crew set sail out of Nome 0300 GMT Aug 15. My prediction: They will reach the 80 th latitude, a full 600 nautical miles short of their goal.

Use half of the world’s is their goal.

It pollutes with its soot

but they don’t give a hoot.

Their aim is for world-wide control.

From NYT: When China halted plans for more than 100 new coal-fired power plants this year, even as President Trump vowed to “bring back coal” in America, the contrast seemed to confirm Beijing’s new role as a leader in the fight against climate change.

China has had a growth per year of between 8 and 10 percent per year for more than a decade, but growth is now down to below 7%. So China decided to call of building 100 coal fired power plants, from 1171 new coal fired plants down to 1071, or about half of the world’s planned coal fired plants.

Here is the installed capacity for China’s electricity production.

China has been praised for its strides in renewable energy. It has many mountains and rivers, so hydropower is a large part. But hydropower is best used as peak power, when the load is high or when the wind doesn’t blow and the sun doesn’t shine, since it can be instantly turned up or down, so coal power carries more like 73% of the load.

But coal is also used for heating and cement production. China has produced more cement in the last three years than the U.S. in the last hundred years. It takes a lot of cement to build artificial islands in the South China Sea. And then there are the ghost cities that can only be produced by total control central planning. Here is a chart of cement production and consumption in the world.

The result? Some of the world’s worst air pollution seen from space.

These brown clouds follow the coast up into the Arctic, where they deposit the soot on the snow and ice, lowering the albedo and causing the ice and snow to melt faster in the summer.

China is the leader in climate change.

JUSTIN GILLIS NOV. 28, 2015 gave his answers to 16 questions in the N.Y. Times regarding Climate Change. This Climate realist added his answer.

Answers to Question 1: How much is the planet heating up?

Justin Gillis answer to Question 2. How much trouble are we in?

The risks are much greater over the long run than over the next few decades, but the emissions that create those risks are happening now. Over the coming 25 or 30 years, scientists say, the climate is likely to resemble that of today, although gradually getting warmer. Rainfall will be heavier in many parts of the world, but the periods between rains will most likely grow hotter and therefore drier. The number of hurricanes and typhoons may actually fall, but the ones that do occur will draw energy from a hotter ocean surface, and therefore may be more intense, on average, than those of the past. Coastal flooding will grow more frequent and damaging.

Longer term, if emissions continue to rise unchecked, the risks are profound. Scientists fear climate effects so severe that they might destabilize governments, produce waves of refugees, precipitate the sixth mass extinction of plants and animals in Earth’s history, and melt the polar ice caps, causing the seas to rise high enough to flood most of the world’s coastal cities.

All of this could take hundreds or even thousands of years to play out, conceivably providing a cushion of time for civilization to adjust, but experts cannot rule out abrupt changes, such as a collapse of agriculture, that would throw society into chaos much sooner. Bolder efforts to limit emissions would reduce these risks, or at least slow the effects, but it is already too late to eliminate the risks entirely.”

My answer to  question: 2. How much trouble are we in?

For climate alarmists: big trouble, for climate realists, not anything out of the ordinary as to temperature rise.
The temperature rise is predicted using models that assume the major effect on the climate is from rising CO2 and ignore other factors such as a changing cloud cover. The imbalance due to rising CO2 levels is less than 2W/m2, and every percent change in cloud cover makes a larger difference. Here is the performance of 73 climate models versus observations.

There is almost no correlation between models and observations. What is the problem? Looking at how the models model clouds gives a hint:

The models are way off on the amount of clouds. Antarctica is almost cloud free and the Arctic has plenty of clouds. This means the models totally underestimate the effects of water vapor (the source of clouds) and overestimate the effects of rising CO2.  It turns out that clouds are the major stabilizer of the climate on the high end, thanks to their high negative feedback – more clouds, cooler climate. This means that even with a doubling of the CO2 levels we will not even get back to even the Medieval warm period. We are in a long cooling trend.
No such feedback occurs when it cools, rather more snow means higher albedo which leads to a new ice age. More CO2 will delay the onset of the next ice age, but will not prevent it. Fear not, the next ice age is probably more than 5000 years away.

Answers to Question 3. Is there anything I can do?

Answers to Question 5. Will reducing meat in my diet help the climate?

Answers to Question 7. Will a tech breakthrough help us?

Answers to Question 8. How much will the seas rise?

Answers to Question 9. Are the predictions reliable?

Answers to Question 10. Why do people question climate change?

Answers to Question 11. Is crazy weather tied to climate change?

Answers to Question 12. Will anyone benefit from global warming?

Answers to Question 13. Is there any reason for hope?

Answers to Question 14. How does agriculture affect climate change?

Answers to Question 15. Will the seas rise evenly across the planet?

Answers to Question 16. Is it really all about carbon?

The Sundance Film Festival will be held January 19 – 29 in Park City, Utah with a new climate change movie from Al Gore yet to be named — and the timing could not be better, it coincides with the Presidential inauguration. Whenever there is a meeting on climate change, In Copenhagen, jn Cancoun, Washington, D.C or wherever, it seems to be unusually cold. This film festival has an environmental theme, so the Polar Vortex is here to last.

Bur fear not: Here is Al Gore in front of a radar image of a rare Southern Hemisphere hurricane:

Al Gore was the champion of hype

Catastrophe fear was his gripe

The Grinch, not the Santa Claus type. 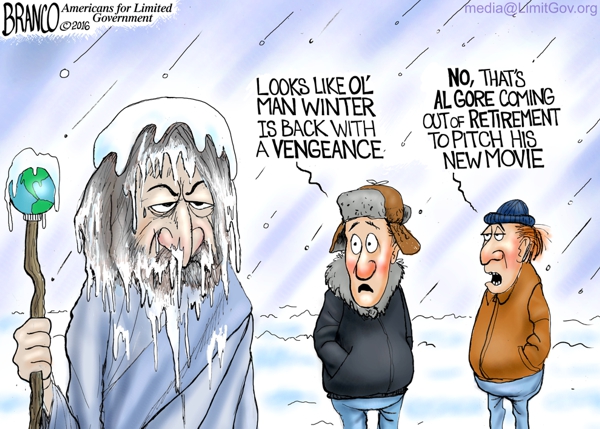 Meanwhile, up near the North Pole it is unusually warm. Why? Because it is snowing much more than normal. Look at this week’s map and chart of Greenland. The snow accumulation is nearly twice normal since the start of the season.

The Polar Vortex is now firmly established over Siberia and North America. Burr, it’s cold outside. 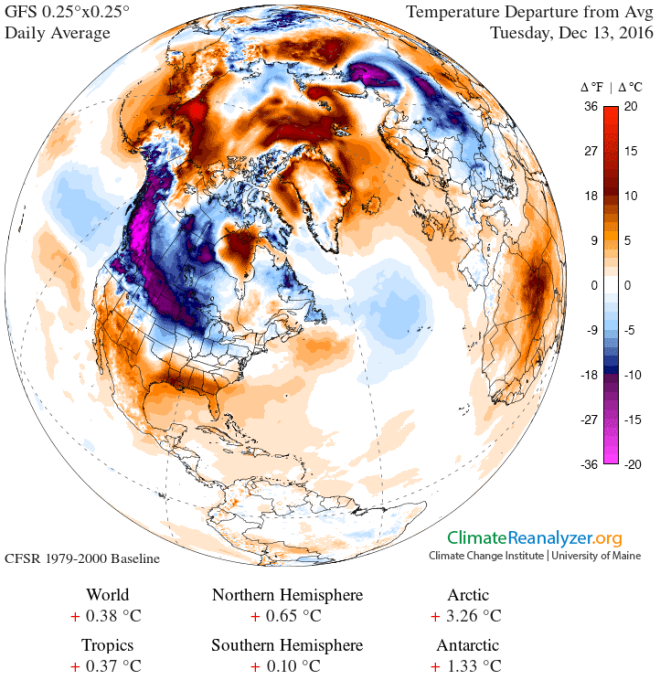 The Arctic warms up when it snows,

Snow comes down from the cloud

In November the global land temperatures had its steepest 8 month drop recorded.

At the same time the Arctic icecap temperatures were unusually warm, spiking one day at 36F above normal.

What happened? Look at the Greenland ice cap

The total ice accumulation over Greenland is now over 300 Gigatons, about 60% above normal since the season started.

That was over land. How is the accumulation over the Arctic ice cap?

After a summer that will go down in history, where the Arctic suffered not one, but two devastating storms, equivalent to category 2 hurricanes, breaking up mush of the outer ice rims the, ice volume has recovered at an above normal rate. The total ice coverage still lags, but the gap is narrowing.

So, is this climate change, and if so, is it getting warmer or colder, or is this just weather?

The climate change alarmists seems to selectively report the weather news showing it is warm somewhere and ignore a more balanced picture. The science is by no means settled, the climate modellers still grossly underestimate the importance of clouds, not only the average coverage, but what time of day or night they appear, and how much thermal energy they carry, and, most important of all, if they come through dry or result in snow or rain.

Finally here is the current snow cover, about 10% above normal for this time of the year. And it isn’t even astronomical winter yet!