We are a divided nation indeed. In no other area is this more apparent than in our attitudes towards Climate Change. Democrats regard is as a top priority more and more, while Republicans maintain it is not much to worry about, way down in the importance of things that need fixing. The PEW research center shows the growing discrepancy:

Republicans live in over 90% of the area of the United States, Democrats are concentrated to urban areas, and in areas of majority black or Hispanic population.

Most of the Democrats live concentrated in Urban areas, and they have already experienced climate change! The Urban Heat Island effect can be as high as 7 degree Celsius on a dog day in August, with humidity to boot!

Most Republicans on the other hand live in rural areas where there are no heat islands. If anything, they are realizing that the winters are less severe, and the summers are not getting hotter. They see good in the climate change, such as we can now feed another 2 billion people on earth, thanks to the fertilizing effect of increasing CO2.

I have put in the reasons why Rising CO2 levels may actually be on balance beneficial : https://lenbilen.com/2020/02/28/climate-change-is-real-and-is-caused-by-rising-co2-levels-leading-to-less-extreme-weather-this-is-on-balance-good-for-the-environment/

Now for the question: Should we expand the burning of fossil fuels?

Even though increasing levels of CO2 is beneficial for the climate we should not expand, but reduce the mining, drilling and fracking of fossil fuels. There are better ways of supply the energy needs of the future. We should leave some of the fossil fuels for our great grandchildren not yet born.

More solar panel farms. This I see as a niche market. China still control 90% of the rare earth metal mining we should only use them in urban areas to lessen the need for an expanded grid. One area that is ideal for more solar panels is to put them up as roofs in open parking lots, especially those that are covered with black asphalt. Parked cars will be cooler and dryer, and it will lessen the urban heat effect.

More wind turbine farms: I love birds, especially large birds such as eagles and raptors. The eagles like to build their aeries on top of the wind turbines, and – you guessed it – they get whacked by the rotor blades. During the Obama administration they upped the yearly allowable kill of bald eagles from from 1100 to 4200. If you kill a golden eagle there is still a 250000 dollar fine. If we increase the number of wind-farms we could run out of large birds.

Hydro-electric power: This is mostly already utilized to capacity. One exception is the river Congo in Africa, still waiting to produce electric power.

Depend on renewable power

is chancy in sunshine or shower.

is becoming a scourge;

the losses add up every hour.

It started innocently enough. In 2012 the California power demand was nearly constant, with power varying 20% from maximum to minimum hourly demand. 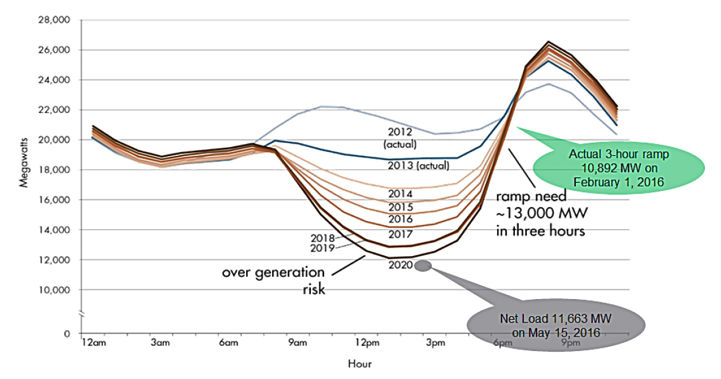 Then California decided to have 50% of renewable energy by 2030, mostly by solar and wind, and passed it into law, but the hydroelectric capacity could not be increased due to “environmental concerns”.

The push for renewable energy has succeeded beyond their wildest dreams, so the goal may be met in 2020, not 2030. There is one major problem.

What can be done when the wind doesn’t blow and the sun doesn’t shine? The electric need must still be met. And therein lies the problem. The sun only shines during daytime, and there is already a surplus of energy in the middle of the day. This affects the prices for peak power, so mush so, that wind and sun generated energy has to pay to feed the grid. They are heavily subsidized, so as long as the amount they have to pay is less than the subsidy the grid will be fed, and the base generation will have to be lowered to stabilize the grid. The prices range from minus five cents/kWh to about 55 c/kWh. (The peak price has been as high as 98 c/kWh during peak demand.

Burt that is only part of the problem. The non-renewable electricity providers will have to double the electricity production every day between 5 and 8 p.m. every day. Using capacitors to even out the grid variations solves 0.3% of the problem.Some can be done by using the dams for power generation, but the grid is not built to handle the drastically increased demand, and environmental fights makes it impossible to build out the grid. In addition, the dams are far away from the areas that need the electricity, in other words, it is a mess.

Talking about subsidies: Electric cars are subsidized to the tune of 2500 to 7500 dollars, and they are recharged when? They are driven mostly during daytime, and when people come home they are put in the charger – at 55 c/kWh to the utility.

Clean energy is not cheap, and it is not clean since the non renewable electric production capacity still has to be fully built up for the time when the sun doesn’t shine and the wind doesn’t blow.