When I grew up a long time ago in Sweden the old folks used to say “If you make it through February, you will make it another year.” This was of course before electricity and central heating”.

There is a saying in Norway: “There is no bad weather, only bad clothes.” Here is an example, the souwester”

It works well in freezing rain.

The long term weather forecast for February, issued January 21 by the weather channel looked like this:

Great, no need to buy that extra sweater, and Texans can go another season with thin t-shirts and designer pre-torn jeans.

But the weather forecast three weeks later looked like this:

But the windmills don’t work in freezing rain, so the electric grid was challenged when over half of the windmills froze just as the demand spiked. Normally coal and natural gas electrical plants would have kicked in, but many of the coal plants had been shut down due to environmental regulations, and the emergency request to restart them were denied due to environmental concerns. The natural gas plants ran full bore until the natural gas pressure in the pipelines started dropping below safe levels. This lead to rotating power-outs to preserve gas line pressure. But in the wisdom of the authorities the gas line pressure compressors had been switched from natural gas to electricity (environmental concerns), so if the compressors were in an area of electric blackout, there went the gas pressure, causing a chain reaction, and the whole power grid came within hours of a total collapse. Only nuclear power hummed along as if nothing had happened, but nuclear power is a base load and cannot increase the power above a certain level. Back in 2017, Secretary of Energy Rick Perry proposed paying Coal and Nuclear Power Stations to keep at least 90 days worth of coal  onsite, for disaster resilience. At the time the resilience proposal was widely criticized as being a thinly disguised Trump scheme to pump government money into the coal and nuclear industries. So the plan was rejected by the bureaucracy. But in hindsight, a bit more resilience might have saved Texas from days of painful electricity blackouts, and even deaths.

Since weather is so hard to predict, do we have any hope of being able to predict future climate? People keep trying. And they keep developing climate models. Here is a chart of most of them: 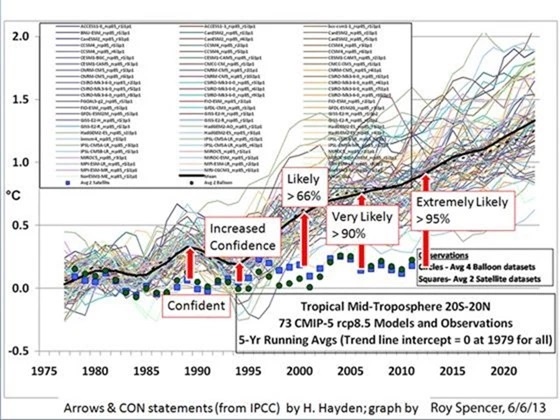 Not much has changed since this chart was first published. While the IPCC confidence in their climate models keep increasing, so does the difference between model prediction and actual temperature.

Climate finance continues to be the central issue in how the global community proposes to follow through with implementation of the Paris Agreement, which Joe Biden has decided to rejoin by executive fiat. This is in the opinion of his advisors, such as John Kerry appropriate in the context of the last IPCC report showing a USD 1.6-3.8 trillion energy system investment requirement to keep warming within a 1.5 degree Celsius scenario to avoid the most harmful effects of climate change (IPCC, 2018).

Does this still make sense?

As CO2 warms up the poles

and clouds are the climate controls.

We live in interesting times, the CO2 concentration has increased 50% since the beginning of industrialization. In the last 30 years the level has risen 17%, from about 350 ppm to nearly 410 ppm. This is what scares people. Is is time to panic and stop carbon emissions altogether as Greta Thunberg has suggested?As if on cue the climate models have been adjusted, and they suddenly show a much higher rate of temperature increase, in this case what is supposed to happen to global temperatures for a doubling of CO2 from pre-industrial times, from 270ppm to 540ppm.

There are two ways to approach this problem. The models make certain assumptions about the behavior of the changing atmosphere and model future temperature changes. This is the approach taken by IPCC for the last 32 years. These models are all failing miserably when compared to actual temperature changes.

The other way i to observe what is actually happening to our temperature over time as the CO2 increases. We have 50 years of excellent global temperature data, so with these we can see where, when and by how much the earth has warmed.

The most drastic temperature rise on earth has been in the Arctic above the 80th latitude. In the winter of 2018 it was 8C above the 50 year average. See charts from the Danish Meteorological Institute:

Note, there is no increase at all in the summer temperatures! 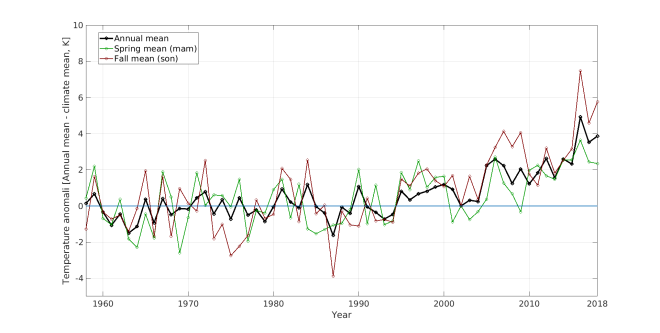 The 2020 winter recorded an about 4c increase Source: DMI.

Notice: In this chart the there is no recorded summer temperature increase at all!

The 5 thru 8C winter rise of temperature is significant, most would even say alarming, but my response is, why is that?

To get the answer we must study molecular absorption spectroscopy and explain a couple of facts for the 97% of all scientists who have not studied molecular spectroscopy. IPCC and most scientists claim that the greenhouse effect is dependent on the gases that are in the atmosphere, and their combined effect is additive according to a logarithmic formula. This is true up to a certain point, but it is not possible to absorb more than 100% of all the energy available in a certain frequency band! For example: If water vapor absorbs 90% of all incoming energy in a certain band, and CO2 absorbs another 50% of the energy in the same band, the result is that 95% is absorbed, (90% + 50% * (100% – 90%)),  not 140%, (90% + 50%).

The following chart shows both CO2 and H2O are absorbing greenhouse gases, with H20 being the stronger greenhouse gas, absorbing over a much wider spectrum, and they overlap for the most part. But it also matters in what frequency range s they absorb. 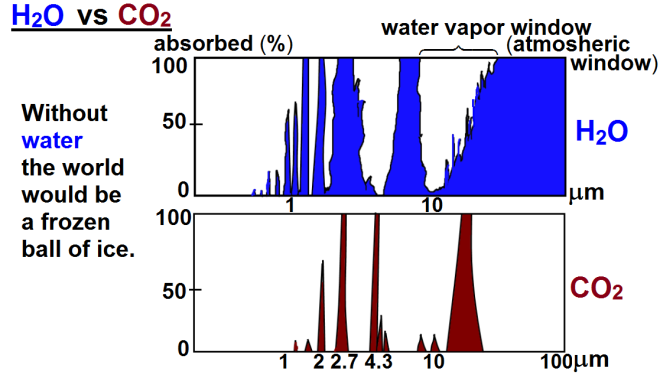 For this we will have to look at the frequency ranges of the incoming solar radiation and the outgoing black body radiation of the earth. It is the latter that causes the greenhouse effect. Take a look at this chart:

Let us  now take a look at the Carbon Dioxide bands of absorption, at 2.7, 4.3 and 15 microns. Of them the 2.7 and 4.3 micron bands absorb where there is little black body radiation, the only band that is of interest is at 15 microns, and that is in a band where the black body radiation has its maximum. However it is also in a band where water vapor also absorb, not as much as CO2,only about 20% to 70% as much. Water vapor or absolute humidity is highly dependent on the temperature of the air, so at 30C there may be 50 times as much water vapor, at 0C there may be ten times as much water vapor, and at -25C there may be more CO2 than water vapor. At those low temperatures the gases are mostly additive. In the tropics with fifty times more water vapor than CO2, increased CO2 has no influence on the temperature whatsoever. Temperature charts confirm this assertion:

There is an obvious answer. When temperatures increase the air can contain more moisture and will transport more moisture from the tropics all the way to the arctic, where it falls as snow. Is the snow increasing in the Arctic?

Let us see what the snow statistics show. These are from the Rutgers’ snow lab. 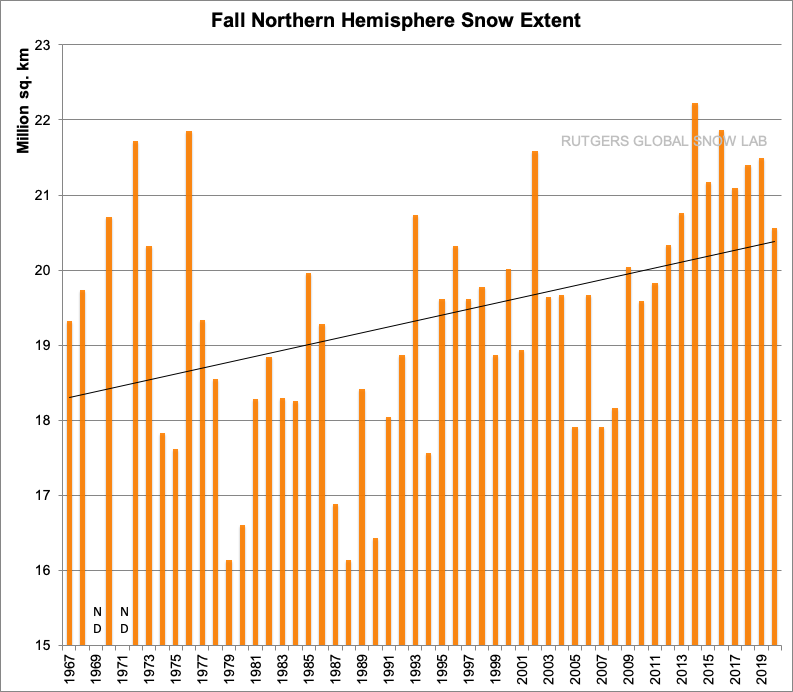 The fall snow extent is increasing, and has increased by more than 2 percent per year. 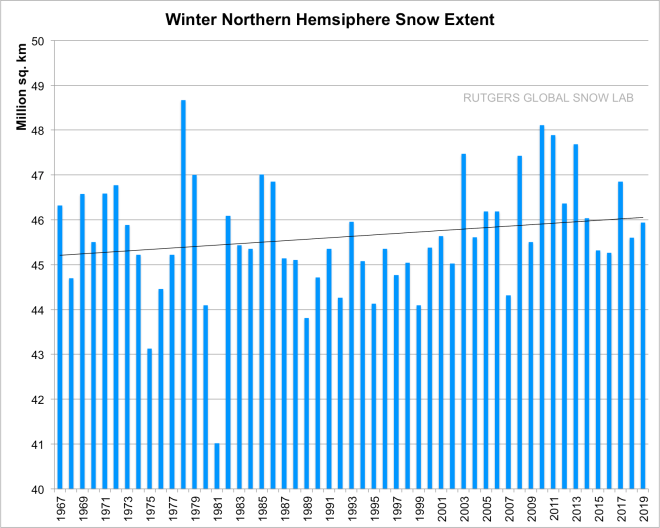 In the spring on the other hand the snow pack is melting faster, about 1.6 percent less snow per year. One of the major reasons for an earlier snow-melt is that the air is getting dirtier, especially over China, and to some extent Russia. The soot from burning coal and mining and manufacturing changes the albedo of the snow. The soot is visible on old snow all the way up to the North Pole. The other reason is that the poles are getting warmer. In the fall and winter it is mostly due to increased snowfall, but in the spring, as soon as the temperature rises over the freezing point, melting occurs.

So the warming of the poles, far from being an impending end of mankind as we know it, may even be beneficial. Warmer poles in the winter means less temperature gradient between the poles and the tropics, leading to less severe storms. They will still be there, but less severe.

There is one great benefit of increased CO2, the greening of the earth. 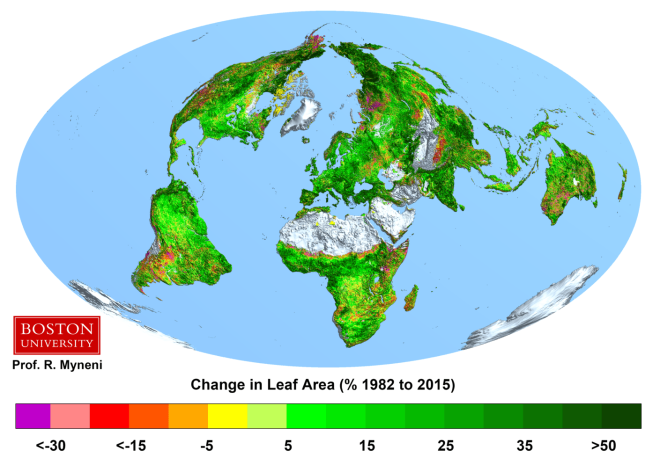 Thanks to this greening, accomplished with only the fertilizing effect of CO2, the earth can now keep another 2 billion people from starvation, not to mention what it does to plants and wildlife.

Having said that, I am still a conservationist. Coal, oil and gas will run out at some time, and I for one would like to save some for my great grandchildren, not yet born. In addition I would like to minimize the need for mining, which is quite destructive.

The best solution is to switch most electricity generation to Thorium molten salt nuclear power. There are multiple reasons why this should be done as a priority.

Here are some of them:

The case for Thorium. 1. A million year supply of Thorium available worldwide.

The case for Thorium. 2. Thorium already mined, ready to be extracted.

The case for Thorium. 3. Thorium based nuclear power produces 0.012 percent as much TRansUranium waste products as traditional nuclear power.

The case for Thorium. 4. Thorium based nuclear power will produce Plutonium-238, needed for space exploration.

The case for Thorium. 5. Thorium nuclear power is only realistic solution to power space colonies.

The case for Thorium. 6. Radioactive waste from an Liquid Fluoride Thorium Reactor decays down to background radiation in 300 years compared to a million years for U-235 based reactors. A Limerick.

The case for Thorium. 7. Thorium based nuclear power is not suited for making nuclear bombs.

The case for Thorium. 10. Molten Salt Liquid Fluoride Thorium Reactors cannot have a meltdown, the fuel is already molten, and it is a continuous process. No need for refueling shutdowns.

The case for Thorium. 11. Molten Salt Nuclear Reactors have a very high negative temperature coefficient leading to a safe and stable control.

The case for Thorium 13. Virtually no spent fuel problem, very little on site storage or transport.

The case for Thorium. 15. No need for evacuation zones, Liquid Fuel Thorium Reactors can be placed near urban areas.

The case for Thorium. 16. Liquid Fluoride Thorium Reactors will work both as Base Load and Load Following power plants.

The case for Thorium. 17. Liquid Fluoride Thorium Reactors will lessen the need for an expanded national grid.

The case for Thorium. 18. Russia has an active Thorium program.

The case for Thorium. 19. India is having an ambitious Thorium program, planning to meet 30% of its electricity demand via Thorium based reactors by 2050.

The case for Thorium 20. China is having a massive Thorium program.

The case for Thorium. 21. United States used to be the leader in Thorium usage. What happened?

The case for Thorium. 22. With a Molten Salt Reactor, accidents like the Three Mile Island disaster will not happen.

The case for Thorium. 23. With a Molten Salt Reactor, accidents like Chernobyl are impossible.

The case for Thorium. 24. With Molten Salt Reactors, a catastrophe like Fukushima cannot happen.

The case for Thorium. 25. Will produce electrical energy at about 4 cents per kWh.

The case for Thorium. 26. Can deplete most of the existing radioactive waste and nuclear weapons stockpiles.

The case for Thorium. 27. With electric cars and trucks replacing combustion engine cars, only Thorium Nuclear power is the rational solution to provide the extra electric power needed.

The case for Thorium 28. The race for space colonies is on. Only Molten Salt Thorium Nuclear reactors can fit the bill.