When I grew up a long time ago in Sweden the old folks used to say “If you make it through February, you will make it another year.” This was of course before electricity and central heating”.

There is a saying in Norway: “There is no bad weather, only bad clothes.” Here is an example, the souwester”

It works well in freezing rain.

The long term weather forecast for February, issued January 21 by the weather channel looked like this:

Great, no need to buy that extra sweater, and Texans can go another season with thin t-shirts and designer pre-torn jeans.

But the weather forecast three weeks later looked like this: 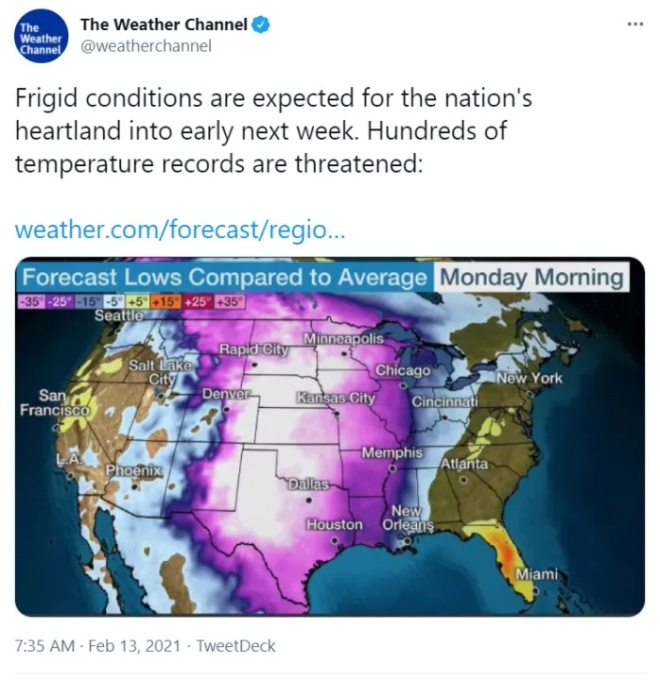 But the windmills don’t work in freezing rain, so the electric grid was challenged when over half of the windmills froze just as the demand spiked. Normally coal and natural gas electrical plants would have kicked in, but many of the coal plants had been shut down due to environmental regulations, and the emergency request to restart them were denied due to environmental concerns. The natural gas plants ran full bore until the natural gas pressure in the pipelines started dropping below safe levels. This lead to rotating power-outs to preserve gas line pressure. But in the wisdom of the authorities the gas line pressure compressors had been switched from natural gas to electricity (environmental concerns), so if the compressors were in an area of electric blackout, there went the gas pressure, causing a chain reaction, and the whole power grid came within hours of a total collapse. Only nuclear power hummed along as if nothing had happened, but nuclear power is a base load and cannot increase the power above a certain level. Back in 2017, Secretary of Energy Rick Perry proposed paying Coal and Nuclear Power Stations to keep at least 90 days worth of coal  onsite, for disaster resilience. At the time the resilience proposal was widely criticized as being a thinly disguised Trump scheme to pump government money into the coal and nuclear industries. So the plan was rejected by the bureaucracy. But in hindsight, a bit more resilience might have saved Texas from days of painful electricity blackouts, and even deaths.

Since weather is so hard to predict, do we have any hope of being able to predict future climate? People keep trying. And they keep developing climate models. Here is a chart of most of them:

Not much has changed since this chart was first published. While the IPCC confidence in their climate models keep increasing, so does the difference between model prediction and actual temperature.

Climate finance continues to be the central issue in how the global community proposes to follow through with implementation of the Paris Agreement, which Joe Biden has decided to rejoin by executive fiat. This is in the opinion of his advisors, such as John Kerry appropriate in the context of the last IPCC report showing a USD 1.6-3.8 trillion energy system investment requirement to keep warming within a 1.5 degree Celsius scenario to avoid the most harmful effects of climate change (IPCC, 2018). 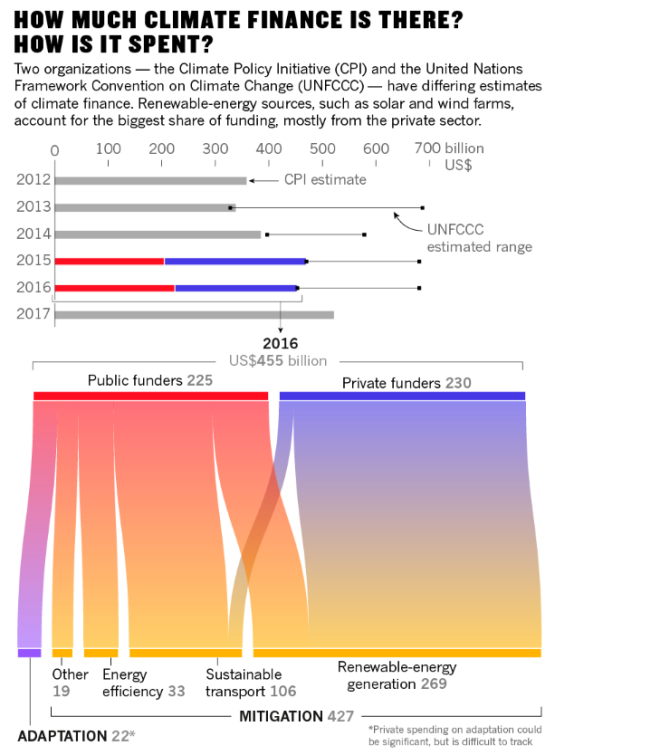 Does this still make sense?