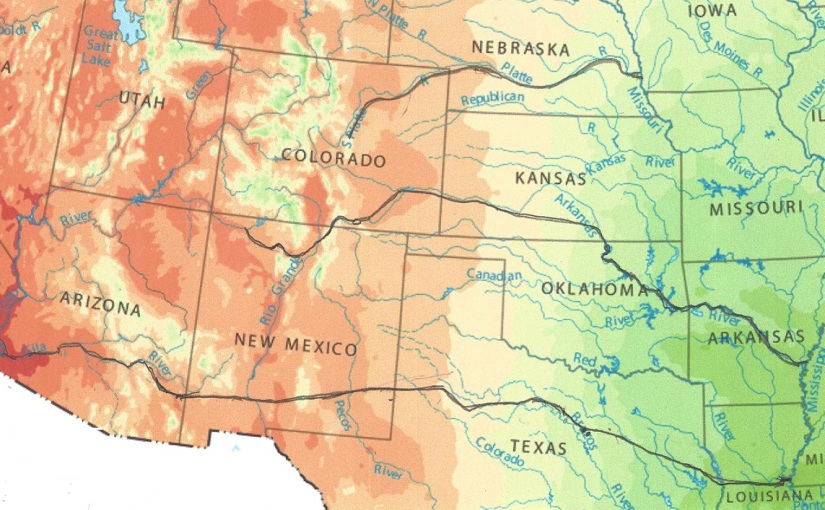 Ever since beginning of time the battle has been about water. The garden of Eden was watered by four rivers, but ever since Adam and Eve were exiled from it, water has been the major concern. In the Middle East the first treaty between Abraham and Abimelech was about water and who was to control it. In Exodus 7:19 (NIV) The LORD said to Moses, “Tell Aaron, ‘Take your staff and stretch out your hand over the waters of Egypt—over the streams and canals, over the ponds and all the reservoirs—and they will turn to blood.’ In Ezra 8:15 concerning the return to Jerusalem Ezra wrote: I assembled them at the canal that flows toward Ahava, and we camped there three days. In Daniel 8:2 Daniel wrote “In my vision I saw myself in the citadel of Susa in the province of Elam; in the vision I was beside the Ulai Canal.” And in Isaiah 19:6 Isaiah Prophesied “The canals will stink; the streams of Egypt will dwindle and dry up.” This means the Nile River would still flow, but the intricate canal system would fail.

The Romans built many aqueducts. Rome had 11 aqueducts to supply it with water. One of the most impressive aqueducts is the Segovia Aqueduct in Spain.

This aqueduct has been maintained through the centuries and supplied Segovia with water as late as the 19th century.

Even in the dry American south-west canals have been built for irrigation in the past, check out this video from the Arizona State University:

When the Hoover dam was built the population in the American south west was around seven million. Now the population dependent on the water from the Colorado river is over 40 million, and growing. Not only is the Colorado River water supply insufficient, but the aquifers are being depleted, and the desertification is starting to set in. Looking at a precipitation map of the u.s there is one obvious solution.

Bring water from the east to the west! There is only one big problem: The Rocky Mountains are in the way. The water must be lifted around 8,000 feet before it will start to flow downhill again. To lift one acre-ft of water one foot requires about 1.08 kWh. Some energy is regained on the way down, but the net energy needed is around 5,000 kWh per acre-ft of water delivered to the thirsty American South-west.

This proposal is to deliver up to 23.75 million acre-feet of water annually to the thirsty American South-west. It will consist of three aqueducts:

The first one is called the South Platte Aqueduct and will serve the Eastern Colorado and help save the High Plains Aquifer, also called the Ogallala Aquifer. It is sketched out here. It is quite modest, only up to 750,000 acre-ft pumped annually, and while the aqueduct will be built to this capacity only 375,000 acrefeet will be initially needed. For now, it will serve about 5 million people.

The second is the Trans-Rocky-Mountain Aqueduct. It will serve the upper Colorado River Basin and the upper Rio Grande Basin. When fully used it will pump 8 million acre-ft yearly from the Mississippi/Arkansas River. It is more fully described here .

The third is the Transcontinental Aqueduct. It will serve the Lower Colorado River Basin, Southern New Mexico and Western Texas. It will pump up to 15 million acre-ft of water annually from the Atchafalaya river (Mississippi river bypass) all the way to the southern Colorado River. It is described more fully here.

The total electricity need to accomplish this giant endeavor is about 120 billion kWh annually. or about three percent of the total US electricity demand. In 2020 the US produced 1,586 billion kWh from natural gas, 956 from coal, 337.5 from wind and 90.9 from solar.

For this giant project to have any chance of success there has to be something in it to be gained from every state that will be participating. Here are the benefits

Arizona: Arizona needs more water. The water from Mississippi is less saline and better suited for agriculture and the people growth makes it necessary to provide more water sources. Right now the aquifers are being depleted. Then what? One example: The San Carlos lake is nearly dry half the time and almost never filled to capacity. With the aqueduct supplying water it can be filled to 80 +- 20% of full capacity all the time. In the event of a very large snow melt the lake level can be reduced in advance to accommodate the extra flow. Likewise during Monsoon season the aqueduct flow can be reduced in anticipation of large rain events. Arizona together with New Mexico has the best locations for solar power, but is lacking the water necessary for hydro-power storage. This proposal will add 13.6 GW of hydro-power storage capable of adding 68 GWh of electric peak power daily.

Arkansas: The main benefit for Arkansas is better flood control and river control and allowing to deepen the draft for the canal barges from 9,5 feet to 12 feet, which is standard on the Mississippi river.

California: The water aqueduct serving Los Angeles will be allowed to use maximum capacity at all times. Additional water resources will be given the greater San Diego area. The Imperial valley will be given sweet Mississippi water, which will improve agriculture yield. The polluted New River will be cut off. There will be water allocated to the Salton Sea. Proposed will be the to mine world’s largest Lithium ore, mining the deep brine, rich in Lithium. (about a third of the world supply according to one estimate). This requires water, and as a minimum requirement to allow mining in the Salton Sea the water needs to be cleaned. This requires further investigation, but the area around the Salton Sea is maybe the most unhealthy in the United States. It used to be a great vacation spot.

Colorado: The future water needs from Fort Collins to Colorado Springs metropolitan area will be met. In addition the Pueblo area will be allowed to use more of the Arkansas River water, since the John Martin Reservoir will be filled by the Trans-Rocky Mountain reservoir.

Kansas: It will get a reliable water supply to serve Wichita and all towns along the Arkansas River in times of drought and to serve additional water needs at all times. It will also improve flood control along the river.

Louisiana: The main benefit for Louisiana is: By siphoning off up to 23.75 million acre-ft/year from the Mississippi river it will lower the flow through the lower Mississippi, especially New Orleans, reducing flood risk. By making these aqueducts the whole Mississippi/Missouri watershed will be incentivized to make sure the river waters are clean enough to be able to use as water supply. This will positively affect 40% of the continental United States landmass.

Mexico: During the negotiations who was going to get the water in Lake Mead Mexico did not get enough water, so they have been using all remaining water for irrigation, and no water is reaching the ocean anymore. In addition the water is too salty for ideal irrigation. This proposal will provide sweet Mississippi water to Mexico, ensure that some water reaches the Colorado river delta. This will restore the important ecology and restore aquatic life in the delta and the gulf. The town of Mexicali will get some water in exchange for shutting off New River completely.

Nebraska: One of the benefits for Nebraska is that it will help save the Ogallala aquifer. The farmers close to the aqueduct will use pumped water from Missouri rather than draw from the aquifers.

Nevada: Las Vegas is a catastrophe waiting to happen unless Lake Mead is saved. With this proposal there will be ample opportunity to make the desert bloom.

New Mexico: The state is ideally suited for solar panels. In addition to give much needed water to communities along the length of the aqueduct, it will provide 10.5 GW of hydro-power storage to be made available at peak power usage for up to 5 hours a day.

Oklahoma: The main advantage for Oklahoma is a much improved flood control, especially through the City of Tulsa. It will provide the same advantage for river barge traffic as benefits Arkansas.

Texas: The state has a big problem. It has already built up too much wind power and can not give up their coal burning power plants until the electricity is better balanced. They have no hydro-electric power storage at all, and we saw the result of that in last year’s cold snap This proposal will give them 18.5 GW of hydro-electric power for up to 5 hours a day.

Utah: The state will no longer be bound to provide water to Lake Mead, but can use all of its water rights for Utah, especially the Salt Lake City region.

Wyoming: The state will be free to use the water in the Green River and all the yearly allocated 1.05 million acre-feet of water can be used by the state of Wyoming.

The cost to do all these aqueducts will be substantial, but it can be done for less than 400 billion dollars in 2021 money, and that includes the cost of providing power generation. Considering it involves 40 million people dependent on the Colorado River now and another 10 million east of the Rocky Mountains, it is well worth doing, much more than other “green” projects, since it will save the American Southwest from becoming an uninhabitable desert.

This proposed solution cannot be made possible without changing our approach to power generation. The mantra now is to solve all our power needs through renewables. Texas has shown us that too much wind power without any hydroelectric power storage can lead to disaster. In addition, windmills kill birds, even threatening some species, such as the Golden Eagle and other large raptors that like to build their aeries on top of the generators. Solar panels work best in arid, sunny climate, such as Arizona and New Mexico, but the panels need cooling and cleaning to work best, and that takes water. They are even more dependent on hydro-power storage than wind. The transcontinental aqueduct will triple the hydro-electric power storage for the nation, and the Trans-Rocky-Mountain will add to it. Without hydro-electric power storage we still need all the conventional power generation capacity for when the sun doesn’t shine and the wind doesn’t blow.

Conventional Nuclear power plants doesn’t work either since they depend on water for their cooling, and most of these aqueducts pump water in near deserts, and there would be too much evaporation losses to use the aqueduct’s water for cooling.

The only realistic approach would be to use LFTR power plants. (Liquid Fluoride Thorium Reactors). There are many advantages for using LFTR. Here are 30 0f them.

For this project to succeed there must be developed a better way to build small nuclear plants more effectively. The price to build a LFTR plant must be less than $2.50 per watt. The LFTR technology is not fully developed yet, but will be ready in less than 5 years. In the mean time there should be built one or more assembly plants that can mass produce LFTR reactor vessels small enough so they can be shipped on a normal flatbed trailer through the normal highway system. My contention is that a 100 MW reactor vessel can be built this way and the total cost per plant will be less than 250 Million dollars. To save the American Southwest we will need about 350 of them, or 87,5 billion dollars total. This cost is included in the total calculation. There will be many more of these plants produced to produce all the electric power to power all the electric vehicles that are going to be built. This is the way to reduce fossil fuels. Just switching to electric vehicles will not do the trick. The energy must come from somewhere.