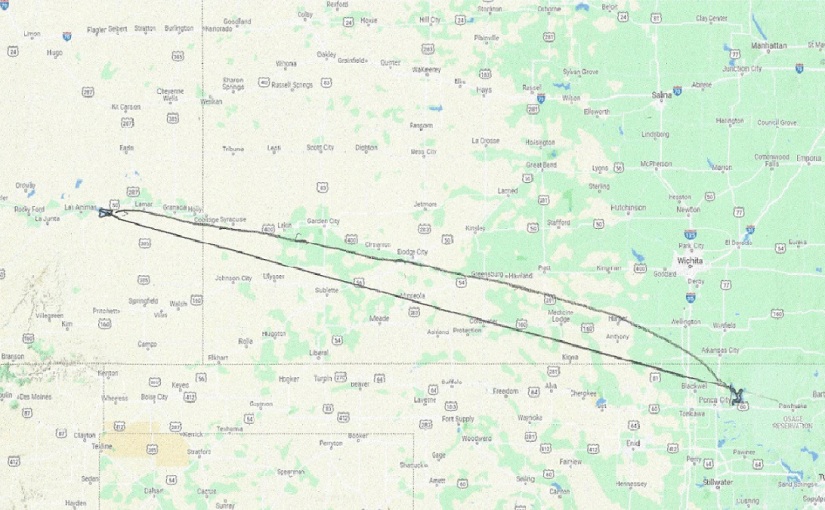 Leg 4 of the Trans-Rocky-Mountain aqueduct: From Kaw Lake to John Martin Reservoir, a distance of about 200 miles.

Leg 4 goes over the Ogallala aquifer

The Arkansas River is by now a meandering creek where once was a huge meandering river. The farmers along the river saw the water decline year after year, and in 1902 they sued the farmers upstream. These lawsuits, Kansas v. Colorado are still continuing from time to time. In 1939 the John Martin dam was authorized, with the purpose of flood control. This made matters worse, since the aquifer no longer was refilled by the occasional floods, and the evaporation of the water in the dam diminished the flow overall. In one of the ensuing lawsuits, Kansas won, and was awarded a large sum of money. Kansas objected, they wanted the award in water, not money. This is the story of the thirsty West.

Here is the solution for thirsty Kansas. The Arkansas river is no longer usable, so the aqueduct will be built south of the river, from Kaw Lake to south of Dodge City to the John Martin Reservoir, gradually climbing from 1010 feet to 3852 feet altitude. Figure in a drop of 2 feet per mile to ensure optimum laminar flow and the total rise in the pumping stations will be (3852-1010+2×200 = 3242) feet. The maximum flow of water up the aqueduct will be 11,200 cfs. The total power required pumping this much water will be 3,3 GW. This can best be resolved by having 33 100MW Liquid Fluoride Thorium Reactors, they are carbon neutral. The reason for small reactors is that they can be built in assembly line fashion and the core reactor can be shipped on a flatbed truck. The reactors will provide power to pump as much water as needed, but will stop pumping water when peak power is needed and start acting as a virtual hydro-storage. There will be drop-off points on the way to provide water for thirsty municipalities. The price of the water for farmers will probably be too high, but towns and industries don’t mind to pay for always available water. For this leg seepage and evaporation losses will be less than 2%.

One thought on “Leg 4 of the Trans-Rocky-Mountain aqueduct. From Kaw Lake to John Martin Reservoir.”