As Europe and North America continue suffering their steady economic and social decline as a direct result of imposing “lockdown” on their populations, other countries have taken a different approach to dealing with the coronavirus threat. You wouldn’t know it by listening to western politicians or mainstream media stenographers, there are also non-lockdown countries. They are led by Sweden, Iceland, Belarus, Japan, South Korea and Taiwan. Surprisingly to some, their results have been as good or better than the lockdown countries, but without having to endure the socio-economic chaos we are now witnessing across the world. For this reason alone, Sweden and others like them, have already won the policy debate, as well as the scientific one too.

Unlike many others, Sweden has not enforced any strict mass quarantine measures to contain COVID-19, nor has it closed any of its borders. Rather, Swedish health authorities have issued a series of guidelines for social distancing and other common sense measures covering areas like hygiene, travel, public gatherings, and protecting the elderly and immune compromised. They have kept all preschools, primary and secondary schools open, while closing college and universities who are now doing their work and lectures online. Likewise, many bars and restaurants have remained open, and shoppers do not have to perform the bizarre ritual of queuing around the block standing 2 meters apart in order to buy groceries.

According to the country’s top scientists, they are now well underway to achieving natural herd immunity. It seems this particular Nordic model has already won the debate.

Because Sweden decided to follow real epidemiological science and pursue a common sense strategy of herd immunity, it doesn’t need to “flatten of the curve” because its strategic approach has the added benefit of achieving a much more gradual and wider spread.

This chart proves the point:

How well are the other non-lockdown countries doing?

Belarus has a total case count of 16705 and a death count of 99, and the death chart looks like this:

Here the daily death count has not risen above 5 per day. in a country of 9.5 million

Japan has a total case count of 14571 and a death count of 474, and the death chart looks like this:

Japan shows a unique pattern: It looked that they had beaten the coronavirus early, but then in April it started up again, but always at manageable levels.

South Korea has a total case count of 10793 and a death count of 250, and the death chart looks like this:

The death count rises, then stays constant for about 2 months and then declines, but slower than the new case count.

Compare this with Belgium, the center of European Union, and roughly the size of Sweden, it has a total case count of 49906 and a death count of 7844, and the death chart looks like this 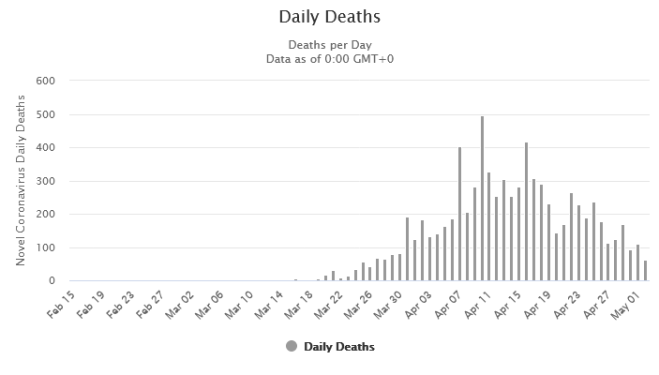 This chart, representative of a lock-down country shows the same rise, flattop and decline as the charts of the non lock-down countries, but has a much higher death rate.

this blog has been updated with values up to July 9: https://lenbilen.com/2020/07/10/sweden-was-right-no-lock-down-but-hygiene-social-separation-and-limited-gatherings-will-work-just-as-well/

2 thoughts on “Sweden was right after all. No lock-down but hygiene, social separation and limited gatherings will work just as well.”