As Europe and North America continue suffering their steady economic and social decline as a direct result of imposing “lockdown” on their populations, other countries have taken a different approach to dealing with the coronavirus threat. You wouldn’t know it by listening to western politicians or mainstream media stenographers, there are also non-lockdown countries. They are led by Sweden, Iceland, Belarus, Japan, South Korea and Taiwan. Surprisingly to some, their results have been as good or better than the lockdown countries, but without having to endure the socio-economic chaos we are now witnessing across the world. For this reason alone, Sweden and others like them, have already won the policy debate, as well as the scientific one too.

Unlike many others, Sweden has not enforced any strict mass quarantine measures to contain COVID-19, nor has it closed any of its borders. Rather, Swedish health authorities have issued a series of guidelines for social distancing and other common sense measures covering areas like hygiene, travel, public gatherings, and protecting the elderly and immune compromised. They have kept all preschools, primary and secondary schools open, while closing college and universities who are now doing their work and lectures online. Likewise, many bars and restaurants have remained open, and shoppers do not have to perform the bizarre ritual of queuing around the block standing 2 meters apart in order to buy groceries.

According to the country’s top scientists, they are now well underway to achieving natural herd immunity. It seems this particular Nordic model has already won the debate.

Because Sweden decided to follow real epidemiological science and pursue a common sense strategy of herd immunity, it doesn’t need to “flatten of the curve” because its strategic approach has the added benefit of achieving a much more gradual and wider spread.

This chart proves the point:

This was in May. It is now July 10, and here are the updated charts:

Sweden is well on its way to herd immunity.

How well are the other non-lockdown countries doing?

Iceland  has a total case count of 1882 and a death count of 10, all between March 21 and April 20.  This was achieved by contact tracing and quarantine alone.

Belarus has a total case count of 64,604 and a death count of 454, and the case and death charts look like this:

Here the daily death count has not risen above 7 per day. in a country of 9.5 million.

Japan has a total case count of 20,371 and a death count of 981, and the case and death charts look like this: 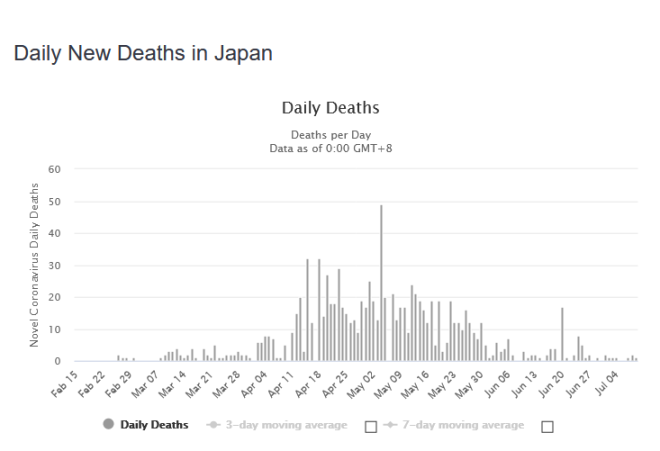 Japan shows a unique pattern: It looked that they had beaten the coronavirus early, but then in April it started up again, and again in July, but always at manageable levels. Japan is still far away from herd immunity.

South Korea has a total case count of 13338 and a death count of 288, and the case and death charts look like this: 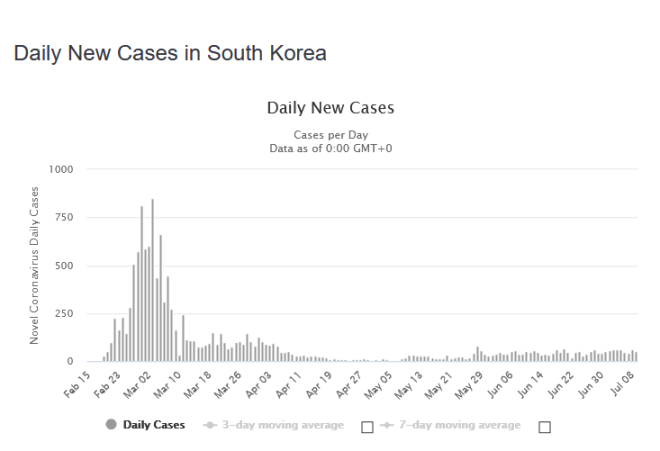 The death count rises, then stays constant for about 2 months and then declines, but slower than the new case count. South Korea took another approach than trying to reach herd immunity. They gave HydroxyChloroQuine to all people that showed symptoms as early as possible. The result is nothing short of remarkable, less than 1 coronavirus death per day in a country of 51 million people!

Taiwan has a total case count of 451 and a death count of 7. And this in a country of 24 million!

How is the United States faring compared to these countries? Is herd immunity achievable in the near future? Current cases are 3,250,705 and the current deaths are 136,158, the highest in the world/ 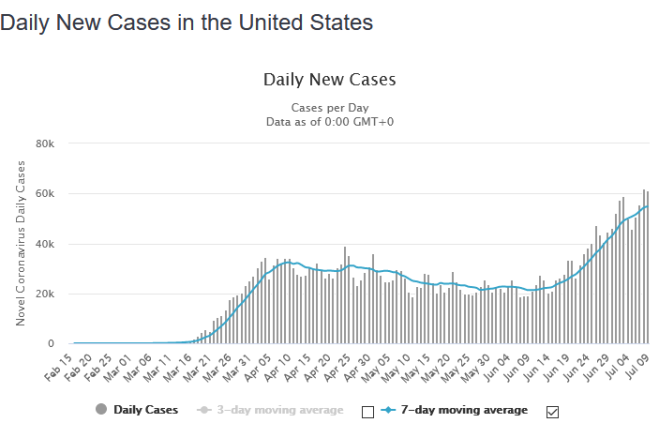 The death rates would be reduced to less than half if the United States adopted the policy of South Korea (and at least 9 other countries) and began to administer HydroxyChloroQuine to nearly all people that showed symptoms as early as possible.