The Icecaps we see at the poles

are growing again, who controls?

With less cold it snows more

makes more ice than before.

Just one of the clouds many roles.

In the winter it is now warmer at the poles.  The temperature records indicate  a noticeable recent warming in the Arctic, with large spikes up and down, up to 3 degree Celsius difference from year to year, especially the Arctic. So, how much has the Arctic melted? Here is a chart of Arctic ice cover for the date of May 31 for the last 39 years.

If this trend continues, all ice may melt in 300 to 400 years, faster if there is further warming and nothing else is changing. Let’s take a look at the Arctic above the 80th latitude, an area of about 3,85 million square kilometers, less than 1% of the earth’s surface, but it is there where global warming is most pronounced. Here are two charts from the last 2 years, ending with Jul. 22,  2017. 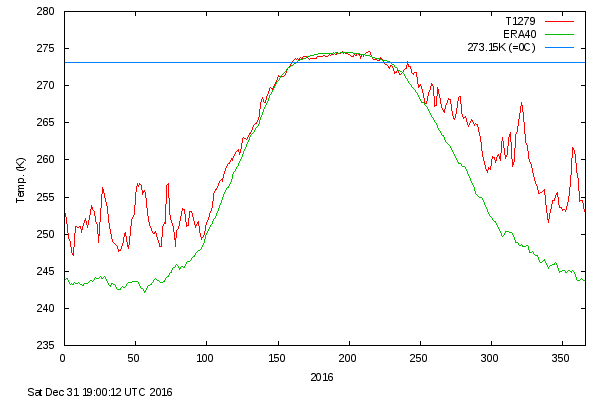 Starting at summer 2016, the Arctic was melting quite normally, but something else happened, shown in the chart below:

Every 5 years or so, the Arctic suffer a large storm with full hurricane strength during the summer. In 2016 there was not one, but two such storms, and as they happened late in the season when the ice is rotten they resulted in a large ice loss, making the ice minimum the lowest on record, and the ice volume nearly 4,000 Gigatons (Gt) less than the 10 year average. Then the temperature from October thru April did run 7 degree Celsius warmer than normal with a spike as high as 20 degrees warmer. Yet today the deficit is down to less than 100 Gt. What happened? It snowed more than normal. In the

Arctic, it did get warmer under clouds, warmer still when it snowed. Take a look at Greenland and what has happened this freezing season. It has snowed and snowed and Greenland has accumulated 150 Gt more ice than normal. The Arctic ice sheet is at this point in the season about 50 Gt below the ten year average (July 21), and this is with Arctic temperatures being seven degrees warmer than normal during the cold season. The counterintuitive conclusion is that it may very well be that warmer temperatures produces accumulation of snow and ice, colder temperatures with less snow accumulates less. (By the way, it snowed less than half as much on the ice caps during the last Ice Age as it does now.) What happens during the short Arctic summer? With more snow accumulated it takes longer to melt last years snow, so the temperature stays colder longer. This year, Arctic temperature has been running colder than normal every day since May 1 with no end in sight. If this melting period ends without melting all snow, more multi year ice will accumulate, and if it continues unabated, the next Ice Age will start.