Luke 11, The disciples asked Jesus on how to pray and he gave them the pattern prayer, also called “The Lord’s prayer.” On prayers, be importune, ask, seek, knock, the key verse is: “ If ye then, being evil, know how to give good gifts unto your children: how much more shall your heavenly Father give the Holy Spirit to them that ask him?” Jesus healed a mute man and some said it was by Beelzebub (the lord of flies). Furthermore Jesus states that he who hears the word of the Father is blessed. When the Jews asked for a sign Jesus answered “There shall be no sign except the Sign of Jonah,” He also proclaimed: “Your eye is the Lamp of the Body, let it shine.” Finally, Jesus proclaimed six woes.

Joshua 7, after the tremendous victory over mighty Jericho, Joshua was humiliated at Ai. Why? Was it because they tried to do it in their own strength or was it the sin of Achan?

Today’s reading starts with one well known chapter of Luke and three chapters of Joshua. Enjoy!

In Luke 10 Jesus did send out the seventy-two, they returned with joy but Jesus admonishes them:  “rejoice not, that the spirits are subject unto you; but rather rejoice, because your names are written in heaven.” He then told the Parable of the Good Samaritan  and finally Jesus went to the home of Martha and Mary. Martha was busy but Mary just sat there and listened to Jesus.

Joshua 4, after crossing the Jordan Joshua commanded they take twelve stones as Memorial Stones to remind the Israelites they crossed Jordan on dry ground. (When the Levites went out of the Jordan River with the Ark the waters returned to flood stage.)

Joshua 5, while camped at Gilgal the second generation was circumcised. Joshua met the Commander of the Army of the LORD.

Joshua 6 describes in living detail The Fall of Jericho. (One of the many  renditions is with the Delta Rhythm Boys.) Enjoy!

Today we read four chapters, one chapter of Luke, the Pentateuch is read and the historical writings begin, starting with Joshua. Enjoy!

In Luke 9 Jesus sent out the twelve apostles, Herod tried to meet with Jesus because his fame was rising, at one time he fed the Five Thousand (besides women and children). Peter Confessed Jesus to be “The Christ of God”. A week later followed the Transfiguration and the next day a boy with an evil spirit was healed. The disciples argued about who would be the greatest.  Jesus spoke against sectarianism, and on their way to Jerusalem they met Samaritan opposition. Finally Jesus told the disciples there is a cost of following Him.

Joshua 1 tells of  God’s Commission to Joshua. The LORD gave the order to Cross the Jordan, “Only be strong and of a good courage”.

Joshua 2 tells the story of the innkeeper Rahab and the spies. From this story we get the idiom “a scarlet thread”.

In Joshua 3 the Israelites were finally crossing the Jordan.

The reading for today is one chapter of Luke and the two last chapters of Deuteronomy.

Luke 8. Jesus told the Parable of the Sower, followed by a lamp on a stand.His Mother and Brothers come to see Jesus, but he declared that his mother and brothers are those who do God’s will. While Sailing across Lake Genesareth a storm arose, Jesus calmed the storm and rebuked his disciples for their lack of faith. Coming to the other side Jesus healed a demon possessed man and healed a woman with a bleeding issue. Finally Jesus raised a dead girl back to life.

Deuteronomy 33. Moses’ gave his final blessing on each of the tribes of Israel.

Deuteronomy 34, Moses died on Mount Nebo. Epilogue: “And there arose not a prophet since in Israel like unto Moses, whom the Lord knew face to face”.

When engineers and scientists want to study an object, the first step is often to study it as a “black body”, apply an impulse to it and study how the body reacts. One such “opportunity” is just now happening, the Coronavirus COVID-19 and how we, as a people react to it.

The healthcare workers expected a higher flu season than average, but nobody expected this. On Dec 31 the Chinese government officially acknowledged that this virus could spread from human to human, but was still insisting it was largely contained to the live animal market in Wuhan. But Wuhan is a large regional hub, with lots of people, even international visitors were coming and going. No tests had been developed yet for the Coronavirus, so who is to say when the outbreak started. Certainly not the Chinese, they had successfully silenced a whistleblower, and he later died of the disease. We may never know the onset, and how many had spread the virus internationally before December 31. The silence of the Chinese government was a medical malpractice of worldwide importance. After Christmas the flu symptoms seem to have abated, but after President Trump issued the travel ban for foreigners who have recently been in China, people got nervous and the healthcare visits took off again. The question is, how much did the increased healthcare visits help or hurt? This chart shows the pneumonia cases, since this is usually how people die, not from the flu but from the following pneumonia. 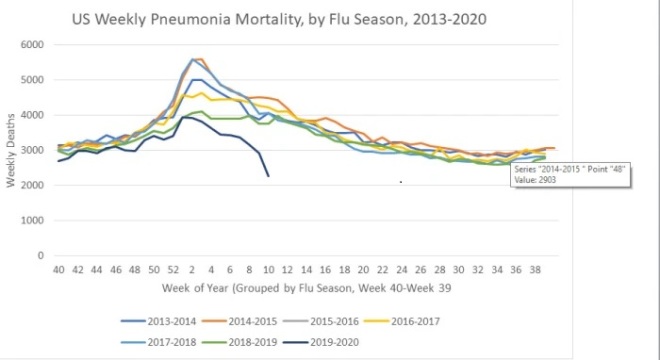 But what was really stunning is the effect the intervention to “flatten the curve”,  that is to slow the spread of the virus by 6 feet of separation “better six feet apart than six feet under“, telling everybody in the country to stay home if they do not have an absolutely essential job, don’t cough into open air, wash your hands with soap and don’t touch your face, had. Enough people seem to have obeyed. Did it make a difference? Check out the total deaths per week:

The number of deaths in the whole country shrank by twenty thousand per Week! This is remarkable. Will it continue, will changing hygiene and social separation continue, or will we return back to where we were before?

Time will tell, but there is much hope. 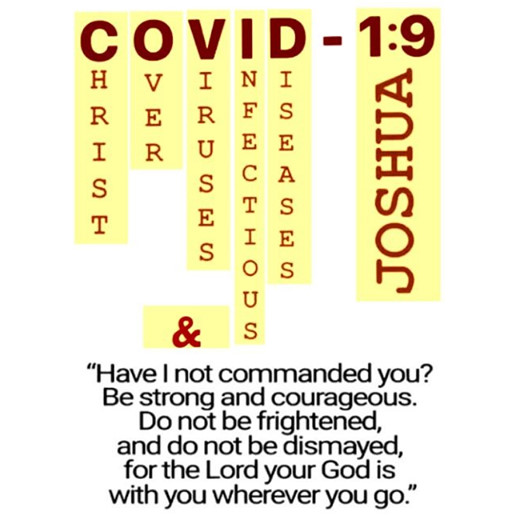 The reverse is just as good:

March 28: Luke 7, Deuteronomy 32 (click on the chapter to begin reading)

Luke 7, Jesus praised the Centurion’s faith and  raised a widow’s son back to life in Nain. Meanwhile John the Baptist asked if Jesus was the one.  Jesus answer: “Among those that are born of women there is not a greater prophet than John the Baptist: but he that is least in the kingdom of God is greater than he.” Finally, Jesus was anointed by a sinful woman, and Jesus forgave her with these words: “Thy faith hath saved thee; go in peace.”

Deuteronomy 32 gives us the Song of Moses. At the end of the chapter the Lord told Moses  he would only see the promised land from a distance and die on Mount Nebo.

Today we read only two chapters, one chapter of Luke and one of Deuteronomy, enjoy!

March 27: Luke 6, Deuteronomy 31 (click on the chapter to begin reading)

Luke 6. Jesus showed he is the Lord of the Sabbath and was healing on the Sabbath. Then Jesus called the twelve Apostles. Luke recorded a shorter version of the Beatitudes, and Jesus added, love your enemies, do not judge, a tree is known by its fruit, and finally the parable of the foolish and the wise builder.

Deuteronomy 31. Moses declared Joshua to be the new leader of Israel, “Be strong and of good courage”. The Law was to be read every seven years, Israel’s rebellion was predicted and, as a reminder Moses recorded his song, which is recited in the next chapter.

Len Bilén's blog, a blog about faith, politics and the environment.
Blog at WordPress.com.