And he (Kish, a Benjamite) had a son, whose name was Saul, a choice young man, and a goodly: and there was not among the children of Israel a goodlier person than he: from his shoulders and upward he was higher than any of the people. (1 Samuel 9:2)

The Israelites, after they entered the promised land were told by God not to have any rulers over them except God. But there must be order so they had judges. A few were good, among them Gideon and one woman, Deborah. The country had peace for forty years under their judgeship, but most of the judges were bad. It got so bad they cried out for a king. After a series of events which you can read about in 1 Samuel 8 thru 10 Saul, the tall one was chosen and appointed.

Evolutionary thought tend to enhance prejudices. One early thought was that since a man’s brain on average is 40% larger than that of a woman, this must be a good reason why women should not be allowed to vote. We now know it to be true, a man’s brain is larger, but a woman’s brain cells are smaller, meaning that the cells communicate faster with each other. While we men take our time to get our threshing machines of brains in gear, a woman’s brain acts like a bolt of lightning, coming up with a plan of action before we even have defined the parameters. They have usually gotten good training dealing with active two or three year olds. An argument could therefore be made a woman would make a better president, having to deal with petulant people like Congress.

Lest this is a praise of women exclusively, they are not without their prejudices. The famous humanist Margaret Sanger, the inspiration to Planned Parenthood, idol of feminists and role model for Hillary Clinton once said:

“We should hire three or four colored ministers, preferably with social-service backgrounds, and with engaging personalities. The most successful educational approach to the Negro is through a religious appeal. We don’t want the word to go out that we want to exterminate the Negro population….”

Choose carefully, look into each candidate’s positions on policy matters, check their character and convictions, then make your decision.

It is the civil duty for every citizen over the age of 18 to cast a vote.

Get involved, get informed!

Only let not height be your choice this year.

to create a wanted poster for a Ku Klux Klan member.

Here is my poster response from the 1946 campaign in West Virginia.

WANTED! Members to join the KKK like our candidate Robert C. Byrd
He promises: Segregation forever.
Will vote against all black nominees to the Supreme Court.
Uphold States Rights.
Our featured speaker a few years ago was Margaret Sanger with her brainchild, the “Negro Project” which seeks to limit, if not eliminate, black births.
That is why we now have Planned Parenthood!!
And remember!! Vote Democrat!!! 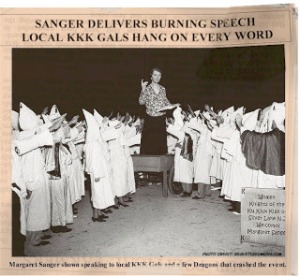 This is a history lesson!!

Verse 49 of the Obama Impeachment song (as if sung by Obama to the tune of “Please release me, let me go”)

I stand by Planned Parenthood

We must kill for common good,

I hate apple pie and motherhood.

And here is the whole impeachment song: https://lenbilen.com/2015/02/25/the-complete-obama-impeachment-song/

No pictures, no comments, it hurts too much.

Planned Parenthood acts are so bold

For research they are sold

Lord help us, when hearts are so cold!

O.K Just one comment. From Barack Obama on the same day the news of the Planned Parenthood merchandizing  baby organs broke.

“We recognize that every child deserves opportunity. Not just some. Not just our own.” —President Obama

There is profit in merchandizing aborted baby organs 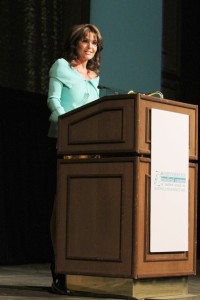 Obama, abortion, his shame;
And Palin and life, to her fame.
For they both spoke today
lie or truth they did say
of our God Given Rights to proclaim.
.
.
.
.
.

President Obama spoke at Planned Parenthood words like this:
Somewhere there’s a woman who just received a new lease on life because of a screening that you provided that helped catch her cancer in time. (Planned Parenthood does not do mammograms)
As long as we’ve got to fight to make sure women have access to quality, affordable health care, and as long as we’ve got to fight to protect a woman’s right to make her own choices about her own health, I want you to know that you’ve also got a president who’s going to be right there with you, fighting every step of the way. Thank

you, Planned Parenthood. God bless you.
An antiabortion group said a local Planned Parenthood group had been aware of complaints about Dr. Gosnell but did not intervene. The Philadelphia Daily News quoted the local group’s leader as saying that women had complained to the group about conditions at Dr. Gosnell’s clinic, and that the group would encourage them to report their complaints to the health department.
“President Obama blatantly ignored this inconvenient truth about the abortion industry’s horrific lack of oversight.
Sarah Palin penned this via Facebook in advance of her speech:
There’s no such thing as a coincidence. Today I’m looking forward to speaking at a pro-life women’s resource center in Nevada. I intend again to remind women that we are strong enough and capable enough to choose life and work together to create a culture that empowers everyone to live to the fullest.
How ironic that on this same day President Obama will be headlining a gala event for the highly controversial and repeatedly discredited organization Planned Parenthood. He’s the first sitting president to speak to them, but then again he’s also the first president who is so radically pro-abortion that as a state senator he refused three times to vote in favor of legislation that would simply provide medical attention to babies born alive from botched abortions.
Considering the role Planned Parenthood has played in looking the other way while the mass murdering abortion doctor Gosnell butchered babies born alive from his horrific infanticide procedures and abused his women patients, it’s perhaps not surprising that this same president sees nothing wrong with allowing his name to be so openly associated with this organization.
Please take a look at the following excerpt from Jonah Goldberg’s book “Liberal Fascism” for information about the racist and eugenicist origins of Planned Parenthood, then ask yourself again why in the world our president would “bless” the cruel underlying efforts of an organization like this.
Do you want him to spend your family’s hard earned tax dollars funding this culture of death? Surely there are people of good conscience within Planned Parenthood and other pro-abortion centers who will feel the imperative within themselves to find other ways to help women in their time of need. There are so many better answers than merely eliminating the most precious, promising ingredient we have on earth – innocent human life. May efforts to cull the defenseless and vulnerable not be “blessed,” instead may God bless those who decide that respecting a culture of life in America is the only way to get us out of the mess we’re in.
~ Sarah Palin
Sarah included this link: 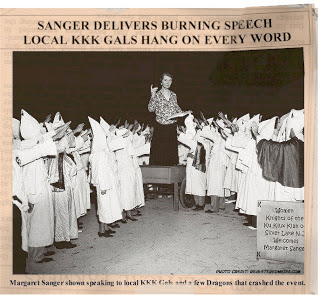 Margaret Sanger, whose American Birth Control League became Planned Parenthood, was the founding mother of the birth-control movement. She is today considered a liberal saint, a founder of modern feminism, and one of the leading lights of the Progressive pantheon.

Planned Parenthood and NARAL (National Abortion and Reproductive Rights Action League) are telling their members that 98% of Catholic women use contraception.

Indeed they did. They included only women between the ages 15-44, normal child-bearing age. They excluded any woman who had not been sexually active in the last 3 months. They also excluded all postpartum or pregnant women. All women trying to get pregnant were also excluded. In fact, the only women included in the study were (pg.8 of the study) “those for whom a pregnancy would be unintended and who are “at risk” of becoming pregnant.” It is unclear if women whose attitude is: While I am not trying to get pregnant I am trusting in God, and if I do get pregnant it is the will of God to do a miracle in me. My hunch is that more than one Catholic woman in 50 has that attitude, so they would have to have been excluded as well.

The study probably should have been stated: 98% of all Catholic women using the services of Planned Parenthood use contraceptives and other forms of birth control, such as abortifacients  and abortion. That may be close to the truth.

There is no profit for Planned Parenthood in promoting abstinence. Yet it works every time.

Nancy Pelosi is informed as always. The hearing was on the constitutionality of the mandate, not biology.

This is her attitude to the Constitution of the United States: