An intrigue in old Carson City

For his Trump-hate is great

but the virus won’t wait

no time to delay and be snitty.

Nevada’s governor has signed an emergency regulation limiting the use of two anti-malaria drugs to treat coronavirus patients, the same medication that President Donald Trump has touted as possible treatments.

Trump has said that using chloroquine and hydroxychloroquine as treatments for coronavirus could be “one of the biggest game changers in the history of medicine,” and said the drugs had been approved for a long time in the treatment of malaria.
Here is a result from a French non-randomized test. This is no time for randomized tests. They may be scientifically perfect, but they take a long time to complete and are very inefficient. Better save lives now! 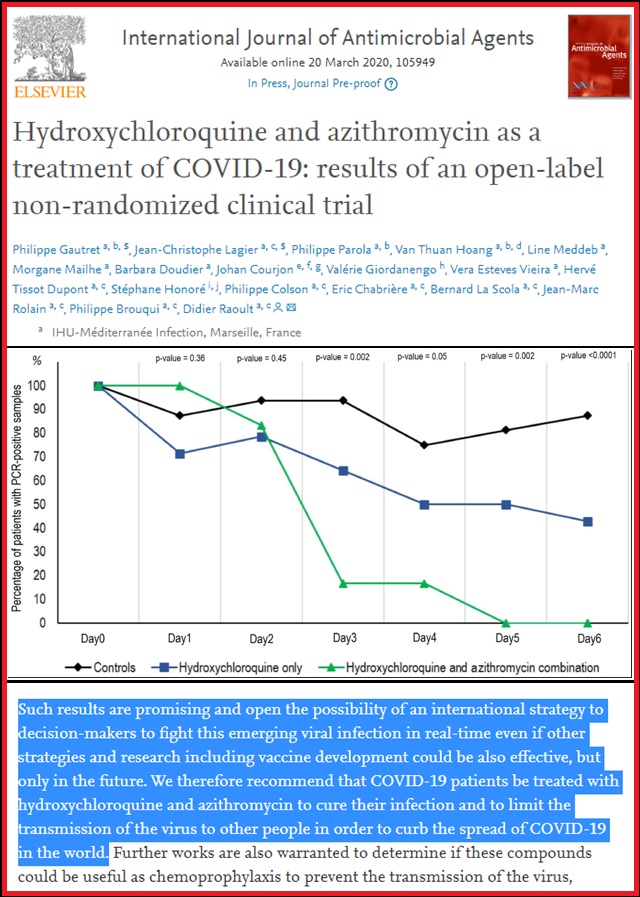 U.K. and now India is blocking export of these substances, so we must make our own, and fast. FEMA has appropriated all available stockpiles of  Hydroxychloroquin and is distributing to medical doctors as needed to prevent hoarding.
To be fair, Governor Sisolak in a later tweet indicated  that he will not forbid a licensed medical doctor to administer whatever he/she deems necessary for treatment of a patient, in other words, render his executive order moot. But it  captured the headlines.

This Coronavirus  can be beaten fast. I have wondered how China and South Korea could recover so fast with few new cases. Then United Kingdom decided to take another approach to combat the virus – do not isolate anyone except the most vulnerable people, and today I found out why. United Kingdom banned export of Chloroquine, a common malaria drug.

It is inexpensive, available and easy to manufacture. Side effects are the normal litany but does not include suicide or death. Let’s go for it!

Here is the background (Thanks, Anthony Watts)

Recent guidelines from South Korea and China report that chloroquine is an effective antiviral therapeutic treatment against Coronavirus Disease 2019.  Use of chloroquine (tablets) is showing favorable outcomes in humans infected with Coronavirus including faster time to recovery and shorter hospital stay.  US CDC research shows that chloroquine also has strong potential as a prophylactic (preventative) measure against coronavirus in the lab, while we wait for a vaccine to be developed.  Chloroquine is an inexpensive, globally available drug that has been in widespread human use since 1945 against malaria, autoimmune and various other conditions.

The U.S. CDC and World Health Organization have not published treatment measures against Coronavirus disease 2019 (“COVID-19”).  Medical centers are starting to have issues with traditional protocols.  Treatments, and ideally a preventative measure, are needed.   South Korea and China have had significantly more exposure and time to analyze diagnostic, treatment and preventative options.  The U.S., Europe and the rest of the world can learn from their experience.  According to former FDA commissioner, board member of Pfizer and Illumina, Scott Gotlieb MD, the world can learn the most about COVID-19 by paying closest attention to the response of countries that have had significant exposure to COVID-19 before the U.S. and Europe.[1]

CDC research also shows that “chloroquine can affect virus infection in many ways, and the antiviral effect depends in part on the extent to which the virus utilizes endosomes for entry. Chloroquine has been widely used to treat human diseases, such as malaria, amoebiosis, HIV, and autoimmune diseases, without significant detrimental side effects.”[3]

The treatment guidelines of both South Korea and China against COVID-19 are generally consistent, outlining chloroquine as an effective treatment.

Specifically, according to the Korea Biomedical Review, in February 2020 in South Korea, the COVID-19 Central Clinical Task Force, composed of physicians and experts treating patients agreed upon treatment principles for patients with COVID-19.[4]  In China, the General Office of the National Health Commission, General Office of the State Administration of Traditional Chinese Medicine as well as a Multi-Center Collaborative Group of Guangdong Provincial Department of Science and Technology and Guangdong Provincial Health Comp and the China National Center for Biotechnology Development have established effective treatment measures based on human studies.[5]

According to their research (reported in Clinical Trials Arena),

“Data from the drug’s [chloroquine] studies showed ‘certain curative effect’ with ‘fairly good efficacy’ … patients treated with chloroquine demonstrated a better drop in fever, improvement of lung CT images, and required a shorter time to recover compared to parallel groups.  The percentage of patients with negative viral nucleic acid tests was also higher with the anti-malarial drug…  Chloroquine has so far shown no obvious serious adverse reactions in more than 100 participants in the trials…  Chloroquine was selected after several screening rounds of thousands of existing drugs.  Chloroquine is undergoing further trials in more than ten hospitals in Beijing, Guangdong province and Hunnan province.”[6]

Chloroquine as a prophylactic (preventative) measure against COVID-19[11]

According to research by the US CDC, chloroquine has strong antiviral effects on SARS coronavirus, both prophylactically and therapeutically.  SARS coronavirus has significant similarities to COVID-19.  Specifically, the CDC research was completed in primate cells using chloroquine’s well known function of elevating endosomal pH.  The results show that “We have identified chloroquine as an effective antiviral agent for SARS-CoV in cell culture conditions, as evidenced by its inhibitory effect when the drug was added prior to infection or after the initiation and establishment of infection. The fact that chloroquine exerts an antiviral effect during pre- and post-infection conditions suggest that it is likely to have both prophylactic and therapeutic advantages.”

The study shows that chloroquine is effective in preventing SARS-CoV infection in cell culture if the drug is added to the cells 24 h prior to infection.

Prophylactic effect of chloroquine. Vero E6 cells pre-treated with chloroquine for 20 hrs. Chloroquine-containing media were removed and the cells were washed with phosphate buffered saline before they were infected with SARS-CoV (0.5 multiplicity of infection) for 1 h in the absence of chloroquine. Virus was then removed and the cells were maintained in Opti-MEM (Invitrogen) for 16–18 h in the absence of chloroquine. SARS-CoV antigens were stained with virus-specific HMAF, followed by FITC-conjugated secondary antibodies. (A) The concentration of chloroquine used is indicated on the top of each panel. (B) SARS-CoV antigen-positive cells at three random locations were captured by using a digital camera, the number of antigen-positive cells was determined, and the average inhibition was calculated. Percent inhibition was obtained by considering the untreated control as 0% inhibition. The vertical bars represent the range of SEM.

In addition, the study also shows that chloroquine was very effective even when the drug was added 3–5 h after infection, suggesting an antiviral effect even after the establishment of infection.

The UK has banned the export of Chloroquine[13]

As of February 26, 2020, the UK government has added chloroquine to the list of medicines that cannot be parallel exported from the UK.  Chloroquine was never on this list before.  This likely happened because of the growing body of evidence of chloroquine’s effectiveness against coronavirus.

In early February, Chongqing Kangle Pharmaceutical was requested by the Ministry of Industry and Information Technology, Consumption Division to promptly increase the manufacturing and production of the active pharmaceutical ingredients chloroquine phosphate despite slowed production during the Chinese New Year.

Chloroquine can both both prevent and treat malaria.  Chloroquine can prevent and treat coronavirus in primate cells (Figure 1 and Figure 2).  According to South Korean and China human treatment guidelines, chloroquine is effective in treating COVID-19.  Given chloroquine’s human safety profile and existence, it can be implemented today in the U.S., Europe and the rest of the world.  Medical doctors may be reluctant to prescribe chloroquine to treat COVID-19 since it is not FDA approved for this use.  The United States of America and other countries should immediately authorize and indemnify medical doctors for prescribing chloroquine to treat COVID-19.  We must explore whether chloroquine can safely serve as a preventative measure prior to infection of COVID-19 to stop further spread of this highly contagious virus.

Then there’s this second study:

The coronavirus disease 2019 (COVID-19) virus is spreading rapidly, and scientists are endeavoring to discover drugs for its efficacious treatment in China. Chloroquine phosphate, an old drug for treatment of malaria, is shown to have apparent efficacy and acceptable safety against COVID-19 associated pneumonia in multicenter clinical trials conducted in China. The drug is recommended to be included in the next version of the Guidelines for the Prevention, Diagnosis, and Treatment of Pneumonia Caused by COVID-19 issued by the National Health Commission of the People’s Republic of China for treatment of COVID-19 infection in larger populations in the future.

Finally, there’s a new study in the prestigious journal Nature:

Chloroquine, a widely-used anti-malarial and autoimmune disease drug, has recently been reported as a potential broad-spectrum antiviral drug.8,9 Chloroquine is known to block virus infection by increasing endosomal pH required for virus/cell fusion, as well as interfering with the glycosylation of cellular receptors of SARS-CoV.10 Our time-of-addition assay demonstrated that chloroquine functioned at both entry, and at post-entry stages of the 2019-nCoV infection in Vero E6 cells (Fig. 1c, d). Besides its antiviral activity, chloroquine has an immune-modulating activity, which may synergistically enhance its antiviral effect in vivo. Chloroquine is widely distributed in the whole body, including lung, after oral administration. The EC90 value of chloroquine against the 2019-nCoV in Vero E6 cells was 6.90 μM, which can be clinically achievable as demonstrated in the plasma of rheumatoid arthritis patients who received 500 mg administration.11 Chloroquine is a cheap and a safe drug that has been used for more than 70 years and, therefore, it is potentially clinically applicable against the 2019-nCoV.

Our findings reveal that remdesivir and chloroquine are highly effective in the control of 2019-nCoV infection in vitro. Since these compounds have been used in human patients with a safety track record and shown to be effective against various ailments, we suggest that they should be assessed in human patients suffering from the novel coronavirus disease.

Produces isotopes that helps cure certain cancers. For decades, medical researchers have sought treatments for cancer. Now, Alpha Particle Immunotherapy offers a promising treatment for many forms of cancer, and perhaps a cure. Unfortunately, the most promising alpha-emitting medical isotopes, actinium-225 and its daughter, bismuth-213, are not available in sufficient quantity to support current research, much less therapeutic use. In fact, there are only three sources in the world that largely “milk” these isotopes from less than 2 grams of thorium source material. Additional supplies were not forthcoming. Fortunately, scientists and engineers at Idaho National Laboratory identified 40-year-old reactor fuel stored at the lab as a substantial untapped resource and developed Medical Actinium for Therapeutic Treatment, or MATT, which consists of two innovative processes (MATT-CAR and MATT-BAR) to recover this valuable medical isotope.