The COVID-19 pandemic is changing the world in ways we do not fully understand and is beyond our control, yet all are trying.

The state of Pennsylvania implemented a rigorous shutdown, but left the nursing home people unprotected. Early on in Lancaster County 75% of the deaths were from nursing homes, and the majority of deaths came from care facilities. In most of the state things were not that bad. In Centre county the two first cases were my pastor, who has been to Washington State, and my son’s pastor, who had been in Lousiana, both visiting conferences. Pennsylvania has now partially opened up, and the statistics looks like this: 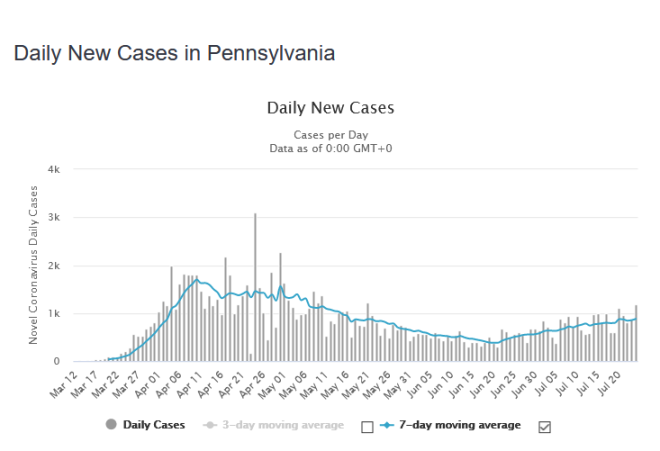 After an initial peak, the case rate were dropping until June 20, and is now rising. (Do the protests have anything to do with the rise?)

The death rate is not rising, and has so far totaled 7,183 with  about 16 new cases a day, and the rate is halved every month or so, which means that the total deaths would be about 8 to ten thousand. Pennsylvania has a population of 12.8 million, so the death rate from corona virus in Pennsylvania is about 0.07%. Total cases so far is about 110,000 and the sum total of cases should be no more than 256,000 or no more than 2% of the population would get the corona virus.

Sweden, a country of 10 million people took a different approach. They did not close the schools, did not close shops and restaurants. They encouraged personal hygiene, social distancing, and wearing masks where social distancing was not possible. They closed sports and music events and encouraged remote work wherever practical. What were the results? The charts are enlightening:

The daily case rate peaked around June 28 and is now down by more than half. Total cases for Sweden is so far 79,000, and will probably, once this pandemic is over, total less than 100,000 or about 1%

Daily deaths are even more interesting. So far 5,700 have died from this disease. The death rate is now near zero, so the total number of deaths will be less than 6,000, or 0,06% of the population.

As we can see from the charts, Sweden is now very close to herd immunity.

The third case is Florida, a state of 21.5 million people. They did have a very small initial wave of cases, but the big rise started to appear at peak summer season. The charts tell a lot:

The total number of deaths so far total about 5,800 or about 0.027 percent of the population. About one third of the deaths occur before the peak, so the total deaths should be between 17,000 and 20,000 and then herd immunity is achieved. this corresponds to a total death rate of 0.08%

All three approaches yielded the same result, total case rate is between 1 and 3,25%, with Sweden, doing the least government interference faring the best.

The total death rates  are between 0,06% and 0,08%, and when the corona virus pandemic has run its course, herd immunity is achieved.