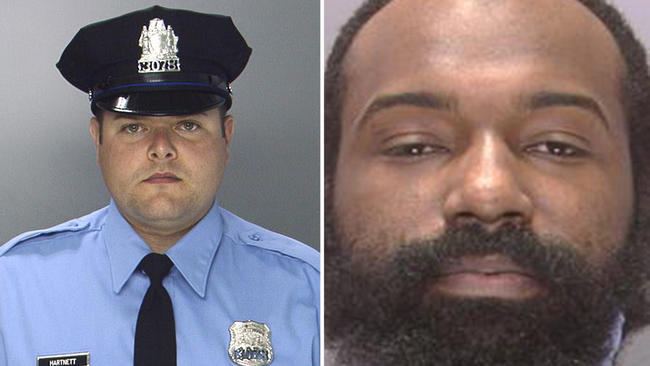 Philadelphia Police Officer Jesse Hartnett was sitting in his patrol car near midnight Thursday  when a man approached, looking as if he was going to ask for directions.
Instead, the man, identified as Edward Archer pulled out a gun, stolen from police more than two years ago, opened fire and pumped about a dozen rounds through the driver side window.
Severely wounded Hartnett was still able to get out of his car and chase after the fleeing suspect, shooting Archer in the buttocks.
Other officers quickly nabbed the bleeding suspect. Hartnett is expected to recover, though doctors say he will require extensive surgeries to repair his left arm, having suffered a severed artery and the main nerve.
According to police, Archer confessed to the shooting and said he did it in the name of Islam, repeatedly pledged allegiance to ISIS, and that he targeted the officer for assassination because police enforce laws that do not comply with Shariah law or the Quran.

Archer’s confession was transcribed and recorded, removing all doubt he was inspired by his Islamic beliefs to engage in the attempted murder of a police officer.

Naturally, in keeping with PC protocol, when the official press conference was held on Friday, the mayor of Philadelphia denied the incident had anything to do with Islam.

Mayor Jim Kenney said, “In no way shape or form does anyone in this room believe that Islam or the teaching of Islam has anything to do with what you’ve seen on the screen.”

The police and government officials, as well as the press, stood stone-faced as he made his statements.

Despite the suspect’s clarity and openness about his motivation, Kenney like President Obama displayed his expert knowledge of Islam, the Koran and the hadith, saying:, “It is abhorrent. It is terrible and it does not represent the religion in any way, shape or form or any of its teachings. … This is a criminal with a stolen gun who tried to kill one of our officers. It has nothing to do with being a Muslim or following the Islamic faith.”

The White House had not commented on the Philadelphia ISIS terror assassination attempt as of late Friday night.

This brings us to verse 78 of the Obama Impeachment song (as if sung by President Barack Hussein Obama to the tune of “Please release me, let me go”)

for ISIS tried a terror sweep.

White House mentioned not a peep.

I would not disturb my beauty sleep!