The Weiner showed up Halloween.

and their PC possessed

all these emails, you guessed,

Friends of Hillary, head for the hills!

For to save her own skin

she will kill you to win.

Yes,  Clintoncide gives me the chills!

Here is an (incomplete) list of people who died knowing the Clintons: 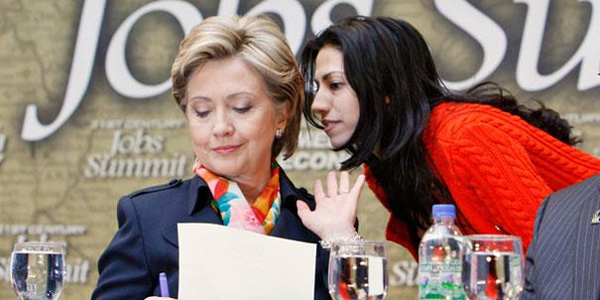 redacted before the election.

For their e-mails must be

too salacious to see.

Too secret for Congress inspection.

The FBI has now in its possession over 15000 of the “personal” e-mails that Hillary deleted from her unsecured private server,  and from other sources. We may or may not see them before the election.

But, as reported by WND – Judicial Watch’s release this week of 725 pages of State Department emails involving Hillary Clinton aide Huma Abedin demonstrates the Obama administration considers a large percentage of the emails sent through Clinton’s private server too sensitive for Congress or the American public to read.

Judicial Watch added that in many instances, the preferential treatment provided to donors was at the specific request of Clinton Foundation executive Douglas Band.

On July 7, Charles McCullough, the inspector general of the intelligence community for the Office of the Director of National Intelligence, in testimony before the House Oversight and Government Reform Committee, admitted his office did not have the security clearances required to read the emails transmitted over Clinton’s private email server that Congress was demanding to see.

Rep. Jason Chaffetz, R-Utah, chairman of the House Oversight and Government Reform Committee, generated the response by asking McCullough if he could provide the committee, in a secure format, the classified emails transmitted over Clinton’s private email server.

“I cannot provide a certain segment of them because the agency that owns the information for those emails has limited the distribution on those,” McCullough explained. “They are characterizing them as OrCon, ‘originator control,’ so I can’t give them to even Congress without getting the agency’s permission to provide them.”

“I can’t say that in an open hearing sir,” McCullough replied.

“So you can’t even tell me which agency won’t allow us, as members of Congress, to see something that Hillary Clinton allowed somebody without a security clearance, in a non-protected format to see. That’s correct?” Chaffetz responded, in obvious disbelief.

McCullough responded that he could not tell the committee in an open hearing even what the emails were about, let alone reveal their specific contents.

“This is the segment of emails that I had to have people in my office read-in to particular programs to even see these emails,” McCullough responded. “We didn’t posses the required clearances.”

“So even the Inspector General for ODNI (Office of the Director of National Intelligence) didn’t have the requisite security clearances?” Chaffetz pressed, seeking to clarify McCullough’s statement.

“That’s correct. I had to get read-ins for them,” McCullough said. 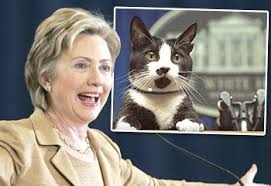 Hillary Clinton often confused. Who would have thunk?

Check out this Huma Abedin email from  January 26, 2013, containing an exchange with Clinton aide Monica Hanley regarding Clinton’s schedule in which Abedin says Clinton is “often confused:” 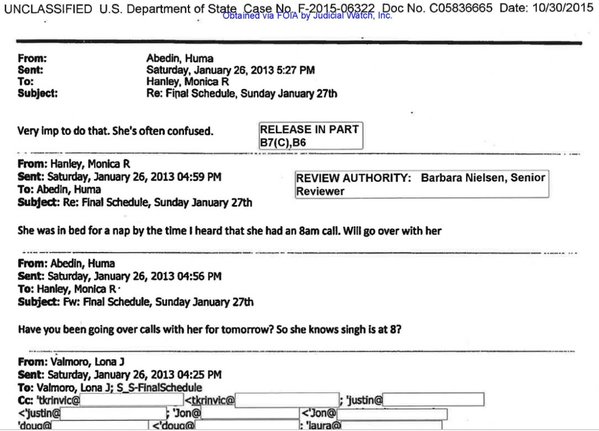 Here are 21 questions for Hillary Clinton. I have made them in the form of a nursery rhyme to make the questions age appropriate for the average low information voter. The answers are purely hypothetical, and does assume a candidness, free from lies for which she hitherto has not been known.

“It’s none of your business, for I am the queen.”

Hillary, Hillary, what did you see?

“I saw heads of states so that they would fund me.”

Hillary, Hillary, what did you do?

“No evidence found that there was quid pro quo.”

Hillary, Hillary, what did you say?

Hillary, Hillary, when did you lie?

“Benghazi for starters, I have a supply.”

Hillary, Hillary, what did you write?

“Deleted my e-mails to give you my spite.”

Hillary, Hillary, why do you run?

Hillary, Hillary, what do you eat?

“Genetically modified food ’til I bleat.”

Hillary, Hillary, what’s with your hair?

Hillary, Hillary, why did you speak?

“To take all the cash from the poor and the weak.”

Hillary, Hillary, do you love life?

“Not if they’re unborn, abort with a knife.”

Hillary, Hillary, why did you cry?

Hillary, Hillary, what was your fee?

“For the students, two millions, I’m cheap, don’t you see?”

Hillary, Hillary, what was the deal?

“Our Uranium to Russia, Bill had a great spiel.”

Hillary, Hillary, why all the lies?

Hillary, Hillary, what is the day?

“I really don’t know, I have nothing to hide.”

Hillary, Hillary, are you contrite?

Hillary, Hillary, are you for real?

“My focus group gives me that warm, homespun feel.”

Hillary, Hillary, are you confused?

A Federal judge has ordered Hillary Clinton and two of her top aides to deliver sworn statements on whether they have produced all the relevant e-mails during their time as employees of the State Department. The judge took the rare step of requiring the trio to deliver their certified statements under penalty of perjury.

For Hillary, Huma and Cheryl

“of perjury” puts them in peril.

Tell the truth? Tell a lie?

It’s past time to slide by.

The judge has them over a barrel.