75 years ago, today, Dec 26, 1941, three weeks after the Japanese attack at Pearl Harbor the British Prime Minister Winston Churchill addressed a joint session of Congress, urging a complete commitment to the war effort. World War II had been raging since September 1939 with the British hanging on by a thread and the U.S. sitting on the sidelines, only offering limited support. After invading Denmark and Norway, Hitler decided to invade the Netherlands, Belgium, Luxembourg and France the night of May 10, 1940. This was the moment Britain chose Winston Churchill as Prime Minister.

When he met his Cabinet on May 13 he told them that “I have nothing to offer but blood, toil, tears and sweat.” He repeated that phrase later in the day when he asked the House of Commons for a vote of confidence in his new all-party government. The response of Labour was heart-warming; the
Conservative reaction was luke-warm. They still really wanted Neville Chamberlain. For the first time, the people had hope but Churchill commented to General Ismay: “Poor people, poor people. They trust me,
and I can give them nothing but disaster for quite a long time.”

Excerpt from his speech: “We have before us an ordeal of the most grievous kind. We have before us many, many long months of struggle and of suffering. You ask, what is our policy? I can say: It is to wage war, by sea, land and air, with all
our might and with all the strength that God can give us; to wage war
against a monstrous tyranny, never surpassed in the dark, lamentable
catalogue of human crime. That is our policy. You ask, what is our aim? I
can answer in one word: It is victory, victory at all costs, victory in
spite of all terror, victory, however long and hard the road may be;
for without victory, there is no survival. Let that be realised; no
survival for the British Empire, no survival for all that the British
Empire has stood for, no survival for the urge and impulse of the ages,
that mankind will move forward towards its goal. But I take up my task
with buoyancy and hope. I feel sure that our cause will not be suffered
to fail among men. At this time I feel entitled to claim the aid of all,
and I say, “come then, let us go forward together with our united
strength.”

Then came The Battle of Britain, which would have been lost but for Winston Churchill and the Royal Air Force. Winston Churchill and Major general Hastings Ismay were travelling together in a car, in which Winston rehearsed the speech he was to give in the House of Commons on 20 August 1940 after the Battle of Britain. When he came to the famous sentence, ‘Never in the history of mankind have so many owed so much to so few’, Ismay said ‘What about Jesus and his disciples?’ ‘Good old Pug,’ said Winston who immediately changed the wording to ‘Never in the field of human conflict have so many owed so much to so few’

Words change history. Britain fought mostly alone in despair awaiting the inevitable invasion that they were in no way prepared to fend off. But then came Pearl Harbor. When Winston Churchill heard about it and that the U.S. had entered the war he slept soundly that night for the first time since the war started. Summoned to the U.S. he gave an impassioned speech to Congress. It was the day after Christmas, so the seats were mostly empty, but he finished the speech with the famous V sign to roaring applause.

About the Japanese he questioned, “What kind of a people do they think we are? Is it possible that they do not realize that we shall never cease to persevere against them until they have been taught a lesson which they and the world will never forget?” As for the German forces he claimed, “With proper weapons and proper organization, we can beat the life out of the savage Nazi. These wicked men who have brought evil forces into play must “know they will be called to terrible account if they cannot beat down by force of arms the peoples they have assailed.”

That was then. What is happening now is in many ways worse. Germany and Japan were well defined entities, Russia and Iran may be, but the real enemy is the ideology of Radical Islam with a two fold approach in conquering the world, terrorism through Jihad, where the “martyrs” are assured of direct entry to heaven, the other is through “emigration and multiplying.” Normal warfare will

not solve this epic battle of the 21st Century. It must be fought with ideology.

Yet the parallels are eerie. Neville Chamberlain came back from meeting with Hitler in Munich with a piece of paper where Hitler promised that after annexing Sudetenland the had no further territorial ambitions. Neville Chamberlain proclaimed “Peace for our time“. That lasted one year.

Obama has “negotiated” a deal with Iran that is much worse. It proclaims to delay Iran’s entry into the nuclear club by 10 years, but does nothing of that sort. Iran can have bombs within six months, and they have the rockets to deliver them. Hitler promised peace, Iran promises that “Israel must be wiped from the Face of the Earth” and “Death to America“. For these promises Obama and John Kerry agreed to abolish the sanctions and give Iran 140 billion dollars, some of it in cash that could be immediately dispersed to their terrorist groups.

Was “Peace for our time” just in name?

When Iran gets its nukes

it’s too late for rebukes.

The best way to explain Obama’s negotiating behaviour is that he is delusional. All 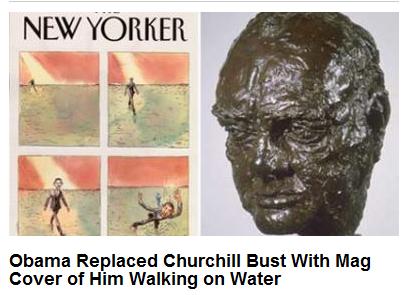 other interpretations are worse. One telltale sign was when Obama told the British to take back the bust of Winston Churchill that had been on prominent display in the Oval Office. He replaced it wirh a photo of himself walking on water.

The consequence starts to attack it.

We must still face the fight.

The bust of old Winston: Take back it!

The final blow came right before Christmas this year. Obama withdrew his support for Israel by abstaining a resolution to condemn Israel’s settlements. This will further destabilize the Middle East making the task of the incoming Trump Administration much more difficult.

As to rub it in , Iran’s supreme leader Ayatollah Khameni has produced a book (In Farsi), outlining how to wipe out Israel. He calls the book “Palestine”. Which calls for verse 52 of the Obama Impeachment song (as if sung by Obama to the tune of “Please release me, let me go”)

Netanyahu is a pest,

His new book put me to rest.

My promise to Jews was just in jest.

The supreme leader of Iran is apparently now an aspiring author but one thing is for sure: this is no love story.

According to a report on Saturday in the New York Post, Ayatollah Ali Khamenei’s new book “Palestine” outlines his case for why Israel must be wiped out and how. “The solution is a one-state formula,” he writes, which is called “Palestine.”

Khamenei, who is described in the book as “the flag bearer of Jihad to liberate Jerusalem,” wrote that his views are not anti-Semitic but “Islamic” and based on “well-established Islamic principles.” basing upon land, which was once owned by Muslims can never be ruled by non-Muslims again. Along with Israel, this also includes Russia, many parts of Europe, Thailand, India, and parts of China and the Philippines.

However, Khamenei singles Israel out as an adou [enemy], doshman [foe] and a “cancerous tumor” for several reasons, the first of which is for being an “ally of the American Great Satan” which is waged in a war to overtake “the heartland of the Ummah [nation].”

Another section of the book boasted past Iran-supported warfare against Israel using examples from Gaza and Lebanon. He writes that he aims to recruit West Bank “fighters” in units modeled after Hezbollah.

Though he doesn’t reference an Iranian nuclear program directly, he mentions that a nuclear Iran would be able to deter Israel from taking any military action against the Islamic republic.

Referring to the Holocaust, Khamenei called it a “propaganda ploy” and writes that “we don’t know why it happened and how.”

The 416-page book is currently only available in Iran in Persian, but apparently an Arabic version is on the way.

(As if sung by Obama to the tune of “Please release me, let me go”).

I tried my best to do him in

T’was a blunder worse than sin

Here are projected seats in Knesset (93% of votes counted)