Even the question is scary.

The fascination for hyperinflation and its

consequences has been with me since childhood. In third grade I went to a small school in Sweden with only two classrooms, one for grade 1 and 2, and one for grades 3 to 6. One boy had a very large stack of old German money, and we used to play with them. Many were hundred mark bills, stamped over with a cheap ink stamp 1ooooo Marks or 1 Million Marks. I collected stamps in those days also, from a 2 Pfennig stamp to 20 Milliarden Marks (That is 20 Billion Marks) stamp.

How did this hyperinflation happen? Germany lost the great war (WWI) and as a punishment were forced to pay large war reparation penalties. My own grandfather had a fishinf ketch, named Majblomma (Mayflower). They ysed to go fishing on Doggers Banks and land the catch in Aberdeen or Hull, then catch some more fish on the way home. One day a German u-boat came up and one officer informed them to go into the life boat, for they were ordered to torpedo the fishing boat. So they did. After the war my grandfather got compensated for his loss, and he bought a much larger schooner, and his team could aontinue fishing in the North Sea. These war reparations sank the German economy, and the Weimar Republic solved the problem by printing money. This worked for a whils, and then hyperinflation set in. This was in my opinion the major reason for Hitler’s rise. He got Germany back on strong economic footing, and being the Master Race, Germany was going to rule the world, after they had won the war. (WWII). With great sacrifice that didn’t happen.

Did it happen again? A few days ago, Nikki Haley sent a real 100 bolivar bill in

the mail to my wife. There was probably a message in that, I for one grabbed the bill to see how much it is worth today. It was printed in August 2014, and was then worth on the official exchange 6,3 bolivars to the dollar, so the official value was over 15 dollars, but the real black market value was about one dollar. Then real inflation set in, and in 2018 they made a new bolívar soberano (sovereign bolívar) each worth 100,000 bolívar fuerte (strong bolívar), so the old 100 bolivar bill was then worth 0.1 cents. But it didn’t stop there. The March 7 exchange rate is 1,889,000 bolivars to the dollar, so the 100 Bolivar bill Nikki Haley gave my wife is now worth 0.000000053 cents

Could it happen here? I used to think never, but now i am not so sure. There are warning signs in the money supply, especially the M1 money supply. The Fed has stopped using it as an indicator of the nation’s fiscal state. Here is a chart of what is going on: 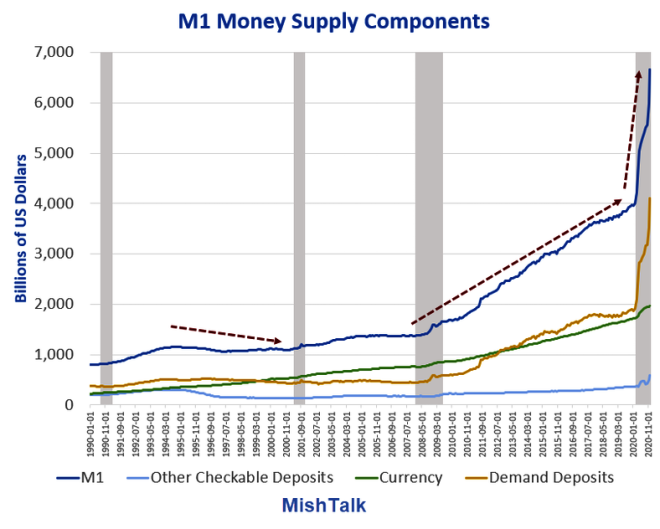 If I understand this right, the FED reduced the denominator in the equation for the velocity of money, meaning that the gain in the system can now be infinite.