was good, not exquisitely fine.

So it just goes to show

that Bill Nye does not know

of Climate Change past, that’s my line.

The “Science guy” Bill Nye once claimed that we are as a globe heating up rapidly and are at the point of no return and the only solution is to drastically reduce burning fossil fuel. As a proof he pointed out that they have started to grow wine grapes in England, unprecedented in history in his opinion.

During the Roman warm period wine grapes were grown almost up to the Hadrian Wall, and there may have been over ten wineries in England. Then the dark ages came and grapes no longer ripened so the wineries were abandoned. During the Medieval Warm Period there was at least one cattle farm on Greenland,  “Gården under sanden”, exporting cheese, seal skins and meat, as well as peregrine falcons, much sought after by the Arabs. But it was abandoned around 1200 A.D. as the glaciers regrew, starting the “Little Ice Age”. We are still recovering from the little ice age. 2018 may have been a warm year, but most years since the ice age were warmer. See Chart.

We are still in the sweet spot of a remarkable stable climate. The next major climate change will be the onset of another ice age. Most of the time the earth is in an ice age.

As we can see, most of the time the earth is in a glacial state. It gets really interesting when we see the temperature versus CO2.

A similar chart led Al Gore to write “Earth in the balance” since the correlation between CO2 and temperature seemed almost perfect and CO2 is rising faster and faster. His conclusion was that temperature will soon follow, and we are all doomed. All Arctic ice would be melted by 2015, Greenland was soon to follow, and by 2020 the tipping point would occur after which we were all doomed unless we stopped burning fossil fuel and produced no more CO2 than what plants absorbed, the so called sustainable model.

We know these facts: If there were no greenhouse effect the average temperature on earth would be -18C, half a degree more or less dependent on solar activity. But, thanks to greenhouse gases it is a comfortable +15C. The two most important greenhouse gases are water vapor and CO2, and of the two water vapor are by far the most important, contributing more than 3/4 of the total temperature rise. We know that if nothing else changes, temperature rise would be between 0.9 and 1.05C for every doubling of CO2. But if temperature rises there would be more water vapor in the atmosphere, so the total rise must be more, maybe as much as 8C per doubling of CO2. This assumption is wrong on at least two accounts. First, water vapor and CO2 absorption spectra are not orthogonal, that is , they absorb mostly in the same wavelengths, and you can not absorb more than all the energy available in that wavelength, so if water vapor absorbed 90% and CO2 30% the total sum of absorption is not 120%, but 93% (0.9 +0.3×0.1). There are over 30 government funded climate models that makes this mistake, and they form the basis for the IPCC climate assessment. Only one, the Russian model does not, they base their model on measurements, and it works much better, so it has been excluded from the IPCC as an outlier.

Second, and even more important, water vapor is a condensing gas and forms clouds when the temperature is below the dew point. This means that part of the indwelling sunlight radiation is reflected back into space rather than hitting earth, and that has a larger effect on temperature than the night time reflection back to earth of the long wave radiation. Can we measure that? Clouds are fickle, they come and go and are hard to grasp. Luckily we have the CERES data set, measuring temperature versus surfaca absorption. The results are staggering.

(Thanks,Willis Eschenbach) Note that 3.7 W/m2 is the increase in downwelling longwave radiation expected from a doubling of CO2 …

There we have it! 0.38C temperature rise globally for every doubling of CO2.

But that is not all! It depends on where on earth we are. Check this temperature rise chart:

Since 1980 CO2 has risen from 335 ppm to about 405 ppm now or about 21%. This change should show itself in rising temperatures. As we can see from this chart there has been no temperature increase at all except for el nino- la nina variations. The tropics has found its temperature since it is mostly water vapor, and CO2 increase is of no consequence. Not so at the poles! The temperature rise at the poles has so far been about 1.2C above the Arctic Polar Circle, less so below the Antarctic polar circle.

What does it mean when the temperature rises in the Arctic? It means More Snow! And we can see that this is happening.

From Rutgers University climate lab comes this chart of fall snow cover in the Northern Hemisphere. This year’s snow cover is about 5% larger than last year at the same day, so we can clearly see that the increasing trend is not broken; if anything, it is accelerating. The snow is also melting faster in the spring and summer, but melting snow keeps temperature in check, so even though winter temperatures are rising (It is less cold in the winter when it is snowing. After the snow comes the cold) the summer temperatures are below normal as long as the extra snow lasts.

Let us go to ice cover, this time on the Great Lakes. If there is any climate change they should surely show it: March 8 2019 the Great Lakes ice concentration hit 80 percent.

Lake Superior and Lake Erie both had an ice cover of over 95%, Lake Huron over 90%. Only Lake Michigan and Lake Ontario lagged with 60% and 40% ice cover.

This has happened only seven times in the last 45 years that the maximum ice cover has exceeded 80%. And if one looks at a graph, there seems to be no trend whatsoever.

But we just had a streak of bad tornado outbreaks. Isn’t that a sign of climate change?

And until this year the trend was down even further

So, tornadoes are down. How about wild fires?

What else does increasing CO2 bring?  Take a look at all disasters.

There seems to have been a strong increase in reported disasters. Could it be that the reporting got better after year 2000, after which we see a slightly declining trend? We seem to be able to handle disasters better. It was much worse a long time ago. Or – the climate is getting more stable.

How about droughts?  Here is a chart of droughts worldwide 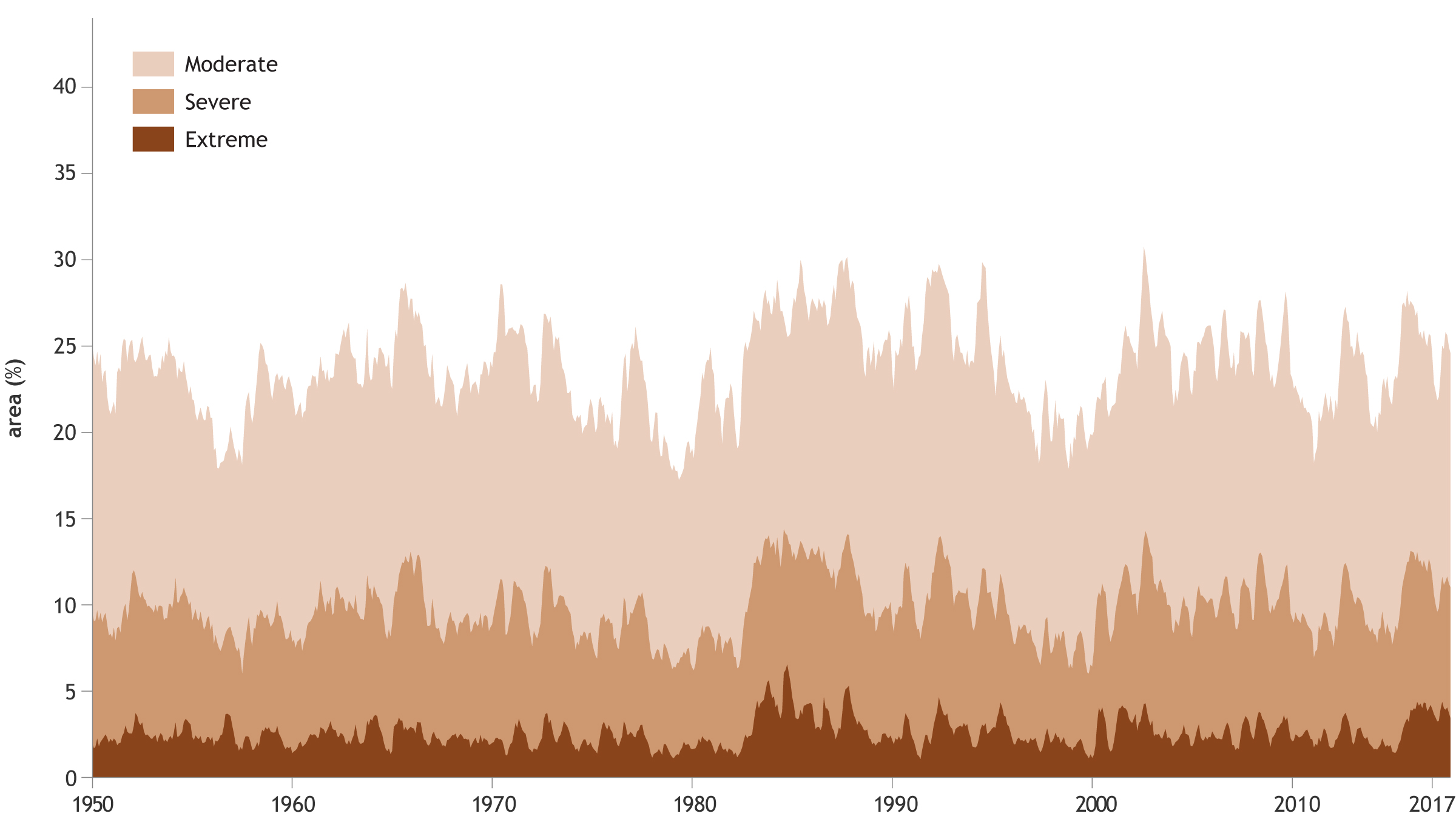 And the U.S. has not been so drought free since measurements started

Yes, but that is because there has been unprecedented rain with unprecedented floods. Isn’t that the extreme climate we are talking about? Yes the Missisippi watershed has gotten a lot of rain lately, and it occurs at a time when the solar activity is at its lowest, in other words, it should be getting colder, but since it is raining and snowing so much this releases a lot of heat into the atmosphere while it is raining out, so the cooling is masked. It is also true that building levees to protect cities increases the flooding in the non levied parts of the rivers, a dilemma indeed.

Could it be that increasing CO2 is good for the climate?

Yes there is a Green New Deal associated with increased CO2! The world is getting greener!

Increasing CO2 helps increasing food supply. This is good for both people and animals. As a side benefit photosynthesis is more efficient and uses less water as CO2 increases.

What do you think? We have enormous environmental challenges, and pollution. CO2 is not a pollutant, but will help delay the coming of the next ice age.