So Hillary sold our Uranium

for bribes and a huge honorarium.

yellow cake, with no ban.

Is anything left in her cranium?

This sheds new light on her “Reset” with Russia in Geneva, March 2009. 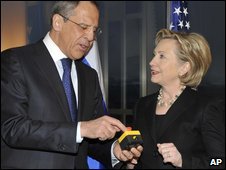 a present meant to symbolize the Obama administration’s vow to “press the reset button” on U.S.-Russia relations.

She handed a palm-sized box wrapped with a bow. Lavrov opened it and pulled out the gift: a red button on a yellow base with a Russian word peregruzka printed on top.

“We worked hard to get the right Russian word. Do you think we got it?” Clinton asked.

“You got it wrong,” Lavrov said.

Instead of “reset,” Lavrov said the word on the box meant “overcharge.”

It doesn’t say ПЕРЕГРУЗКА on the button, it says PEREGRUZKA. The mistranslation is bad enough, but using Roman letters instead of Cyrillic? What was going on? Didn’t anyone realize they use a different alphabet over there? There are two possible explanations: Ignorance, or arrogance on the part of the Hillary Clinton State Department. I know  Hillary Clinton has demonstrated plenty of both in statements such as: “What difference does it make?”

How has this reset worked out for us? Besides Iran, Syria, Turkey, Hezbollah, Libya, Pakistan, Egypt, Tunisia, Algeria and many other countries where U.S. and Russia have opposing interests, and Poland where we plainly sold out the missile defense, we are in a pickle on at least two fronts:

Since Obama made it NASA’s highest priority to promote the contributions of Islam to science and the scrapping of the space shuttle program with no replacements in sight we are still totally dependent on Russia to ferry our astronaut scientists to and from the space station.

Russia is doing the rational thing: Tripling the fees from $22 million to  $71 million to transport just one American astronaut to the International Space Station (ISS) aboard its Soyuz spacecraft in 2016. –

2. Uranium. By selling 20% of our Uranium to Russia via a Canadian Corporation in exchange for a a total of $145 million donations to the Clinton Foundation and a half million dollar speaking fee for Bill Clinton, this has left us vulnerable to extortion, since we are 90% dependent on imported Uranium for our electricity production. The U.S. only have 1.9% of the world’s Uranium resources. Losing control over 20% of the 1.9% means we are now even more vulnerable in our power generation, not to mention national security.

Maybe Hillary really meant “Overcharge” instead of reset? Hillary, as well as Obama seemed to love to give money and influence to our adversaries instead of caring about our economy at home.

We need a major national effort in developing Thorium based Nuclear energy. there is a million year supply of Thorium, as opposed to Uranium, where we are hopelessly reduced to importing 92% or more of our need.