Slovenia is really its home.

So the Pope was all right

Visiting the Vatican, President Trump, his wife Melania and daughter Ivanka had a meeting with His Holiness, Pope Francis. The meeting started out tense, but after the half an hour private one on one audience, the President and the Pope emerged all smiles. President Trump said: “Thank you. I won’t forget what you said.” Later  he tweeted: “Honor of a lifetime to meet His Holiness Pope Francis. I leave the Vatican more determined than ever to pursue PEACE in our world.” 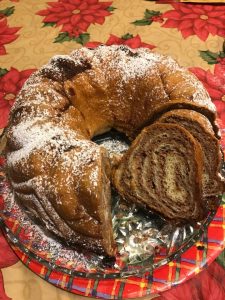 The Pope, smiling broadly  even cracked a joke with Melania Trump. His Holiness the Pope asked Melania (in Italian): What do you feed your husband? ‘Potica?’  Melania laughed and answered in Italian “Potica, si, … yes”, the perfect answer. After all, Melania is fluent in six languages: Slovenian, Serbo-Croatian, Italian, German, English and conversational French. The Pope is fluent in Spanish, Italian, Portuguese, French, German, Ukrainian and Piedmontese  and, of course, Latin.

The mike feed wasn’t all that great, so many newspapers got it all wrong. The Guardian(UK) thought Melania responded “Pizza”. Huffington post seemed to indicate the Pope suggested that Trump looks like he’s filled with yeast, milk, butter, eggs and lots of nuts. Washington Post got it all wrong and called it an awkward exchange. The Pope and Melania understood each other perfectly in Italian, but the interpreter (interruptor) had to mistranslate Potica to Pizza. The Pope loves Potica, and it is the traditional cake for Christmas and Easter in Slovenia, Melania’s native country. It was the perfect small-talk.

Speaking of nutcake, or more properly nutbread it is really much more healthy if you mix in nuts or almonds with the bread as a substitute for shortening. We used to live in Lancaster County, where Ephrata Cloister is located. Once visiting the cloister we took a tour of the graveyard and noticed the brothers and sisters lived long lives, most reaching their 70’s, a rare occurrence in the 1700’s. They lived an ascetic life, sleeping six hours a night in two three hour shifts on a 15 inch wide wood bed with a wooden block as a pillow. They ate only one meal a day, vegettarian, but … it was rich in nuts, walnuts, black walnuts, Chestnuts, Lancaster County is rich in nuts. My wife tried them all in breads and cakes, also almonds, filberts, pecans, but not macadamia nuts, and no cashews.