wants honor; he still is a dork.

PETA’s man or the year

He’s finished, in him stick a fork.

“When the mayor of New York City talks, the world pays attention and Mayor deBlasio’s kindness to animals and determination to protect them speak volumes,” PETA President Ingrid Newkirk said in a statement. 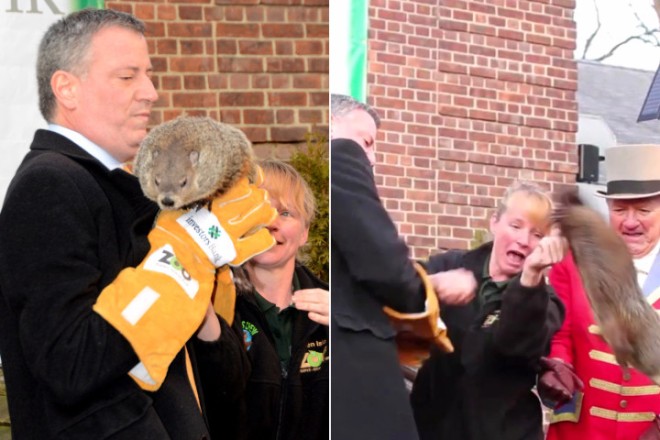 A week after N.Y.Mayor deBlsasio dropped Staten Island Chuck in front of a crowd of spectators on Feb. 2, 2014 the winter-weather prognosticator died of internal injuries — and then the coverup began, Staten Island Zoo officials went to great lengths to hide the death from the public — and keep secret the fact that “Chuck” was actually “Charlotte,” a female impostor, sources said.

The stand-in was found dead in her enclosure at the Staten Island Zoo on Feb. 9 — and a necropsy determined she died from “acute internal injuries,” sources said.

Mayor Bill de Blasio, his administration threatened to be overwhelmed by a rift with rank-and-file New York Police Department officers, on Monday condemned the thousands of cops who turned their backs to him during a pair of funerals for slain police officers.