Subtle? Diplomatic insult at the torch lighting ceremony in Sochi.

The Winter Olympics in Sochi is by far the most expensive ever, having cost over 50 Billion dollars so far, maybe 60 if one includes the military security preparations, more than three times as much as all previous Winter Olympic combined.

As the 1936 Olympic Games in Berlin was to be a monument to the Fuhrer and to the invincibility of the Third Reich, and the superiority of the Aryan Race, so this is Putin’s games. The opening ceremony in the “Fish Stadium”, built only for the opening and closing ceremonies, was magnificent, highlighting the thousand year history of Russia, with all its glory from Peter the Great, their literature, their longing and dreams. Putin want to reestablish Russia as the world leader. After all he has publicly said that the greatest tragedy of the twentieth century was the breakup of the Soviet Union, never mind World War One and WWII, the holocaust, tenths of million people murdered under Stalin and Mao Tse Tung, the killing fields in Cambodia, to name a few. No his ego must be satisfied.

Obama is not going to the games. He claims as one of the reasons Putin’s treatment of gays, but it is probably more their mutual intense personal dislike for each other.  It came in full bloom last September when Obama refused to meet with Putin on a personal level at the economic summit in Russia, and went to Sweden instead. He didn’t dare to talk with Putin about Syria and the Middle East and decided to delight the Swedes instead. After all, Sweden is a world leader in alternate energy research, and that is more important than dealing with Syria.

Which brings us to the Torch Lighting ceremony. Everybody wants to carry the Olympic Torch, so 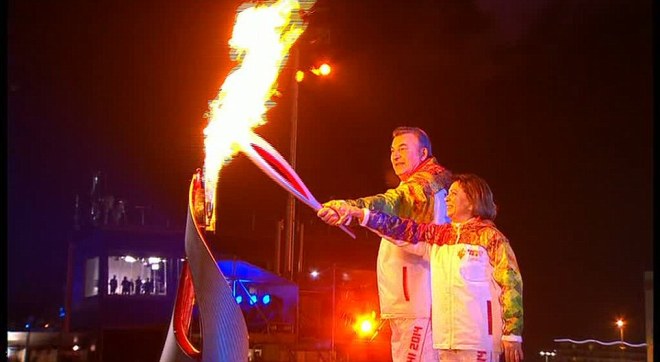 it had been to its longest journey in history, there were many at the stadium, and the torch were handed over and over again. The most important person in the hand-off sequence is the one that actually does the lighting, so Putin chose two.

One of the two was Irina Rodnina. 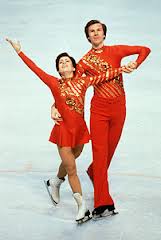 I remember her well from three previous Olympics where she won the Gold medal in pairs figure skating all three olympics, but with two different partners. This was in the days when grace and elegance was the game, and she had been trained in classic ballet and the Soviet athletes were unbeatable. She went on to be a member of the Duma, joining Putin’s party. She made international headlines last September when she sent out a doctored photo of Obama and first lady Michelle Obama appearing to stare at a banana. The photo outraged the Obama administration and prompted U.S. Ambassador Michael McFaul to denounce Rodnina’s “outrageous behavior, which only brings shame to her parliament and country.”

Opposition leader Alexei Navalny re-tweeted the photo, with the caption: “Look at the jokes Russian MPs make.”
Rodnina erased the tweet soon after but defiantly refused to apologize.

But you know, once you have tweeted a photo, it is there forever, and here it is: 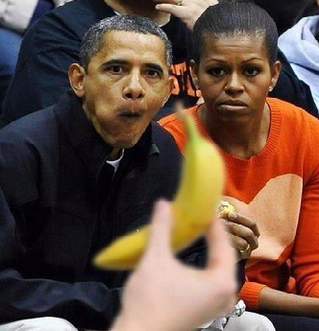 By our standards it is certainly racist, but by Russian standards it simply means “stupid as an ape” and means a stupid person. It is meant as an insult, and has no racial overtones. On the other hand, had she tried this with Putin, the result might have been different. Now she got to light the torch; it delighted her leader.