The ANTIFA creates a melee.

According to The Baltimore Sun, the statue, first erected in 1948, included a dedication ceremony of prominent city politicians like Pelosi’s father who led the municipality at the time.

At the dedication, D’Alesandro said of the monument, “Today, with our nation beset by subversive groups and propaganda which seeks to destroy our national unity, we can look for inspiration to the lives of Lee and Jackson to remind us to be resolute and determined in preserving our sacred institutions.” 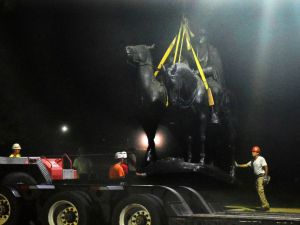 The Statue of Robert E. Lee,

A symbol of South history:

All the Democrats fame;

They try to erase memory.

Franklin Delano Roosevelt is considered an enduring hero of the left, particularly for the New Deal. Few would say he was an avatar of white supremacy. Yet, he spoke at the dedication of the  Robert E. Lee statue in Dallas back in 1936 — and what he said about the general then is something that liberals everywhere would like to erase.

“I am very happy to take part in this unveiling of the statue of General Robert E. Lee,” FDR said at the dedication ceremony, according to the American Presidency Project at the University of California, Santa Barbara.

Things change. What once was the proud symbol of the Democratic South is now considered repugnant by people wanting to erase history, and in so doing repeat it.