Chills us down, just to show

This picture was taken Nov 15 from our porch in Boalsburg, PA. It was a very early snowfall.

Last night it was 11 F in Boalsburg, a new low for this date, and tomorrow night may set a new all time low for November since records begun.

This is of course local weather, but looking at the whole picture it seems to get colder in the Northern Temperate Region and in the Arctic in spite of temperature readings showing higher than average temperatures.

Let me explain: Everybody knows that in the Summer clouds cool by day and warm by night. Up North in Winter clouds containing snow, warm the atmosphere both day and night, and yet they cool down by depositing snow.

We are having earlier snowfalls in the Northern Hemisphere 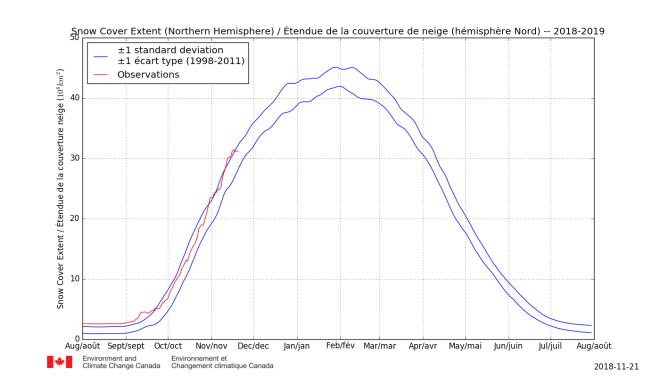 This chart is from yesterday and is from the Canadian department of  ‘Environment and Climate Change’, so we can rest assured that the amount of snow cover is not over-estimated.

From Rutgers University climate lab comes this chart of fall snow cover in the Northern Hemisphere. This year’s snow cover is about 5% larger than last year at the same day, so we can clearly see that the increasing trend is not broken; if anything, it is accelerating.

From sunshinehours.net comes this chart, showing the Arctic ice cover has grown from being the lowest on record in October to the highest in the last seven years for Nov 21. 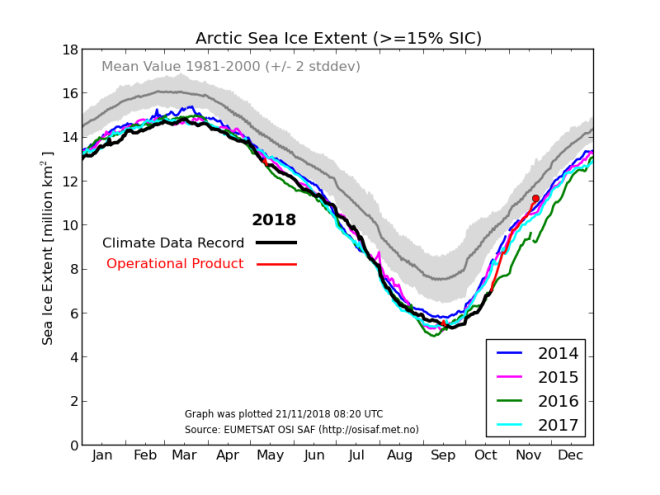 This is confirmed by the Danish Ministries for Energy, Utilities and Climate. The charts can be found at polarportal.com.

confirms that it was not just a flash-over of ice on a calm ocean, but real ice accumulation at a record clip since October.

This trend of increasing Fall snow and ice accumulation has not been well published. The earlier Spring arrivals with heavier than normal snow-melts have, but the reason for early Springs is not primarily increasing CO2. A bigger impact comes from the brown clouds emanating from mostly China. 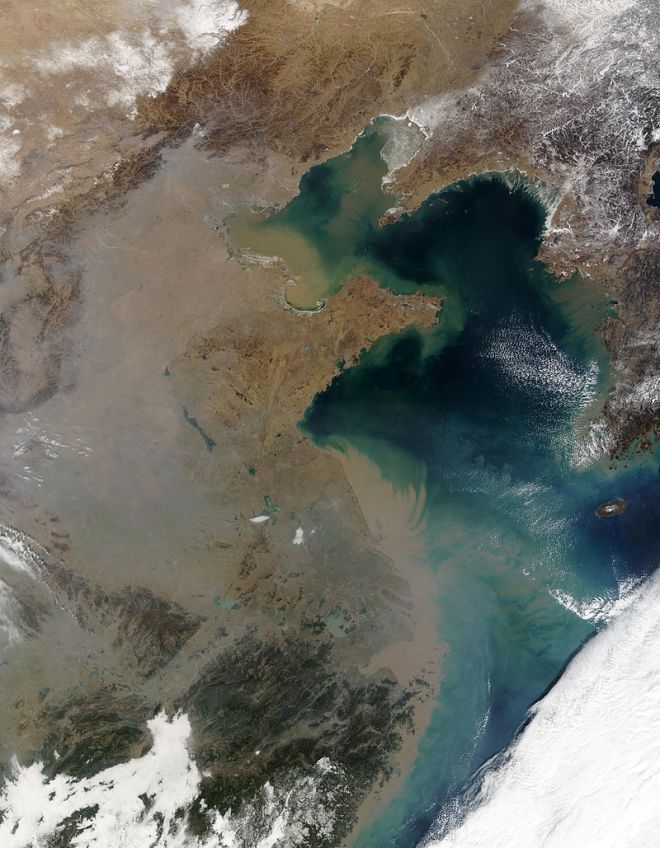 The soot from these clouds make its way all the way up into the Arctic and is deposited on the snow, changing the albedo, leading to an earlier snow-melt.

When it comes to reporting of results from valid research, what is published is often cherry-picked to satisfy political agenda. True climate research is by no means settled, and the future is, at some time we will enter into the next ice-age, which is the normal state of the Earth. The negative temperature feedback from clouds limits the temperature rise. The Tropics has found its temperature, no amount of increasing CO2 will change that, the lack of increase in the tropospheric hot-spot in the tropics as the CO2 level increased from 320ppm to 410 ppm proves that. The insrease, if any is less thas 1/7 of what the models predict. In the Arctic there will be a winter temperature rise, mostly because of increased snowfall, and to a minor degree from increased CO2. The increased snowfall in the Arctic make the winters warmer (about 5 C), but the Summers cooler (about 1/2 C)

(From the Danish Meteorological Institute)

Climate Studies are fascinating, the Science is far from settled, we are still at the beginning of understanding the major temperature regulator of the world: Clouds.

Today is national day of prayer. All over the country, and in places overseas people, in small groups, usually around a flagpole, but here in Boalsburg at the Military Museum, gather to pray. 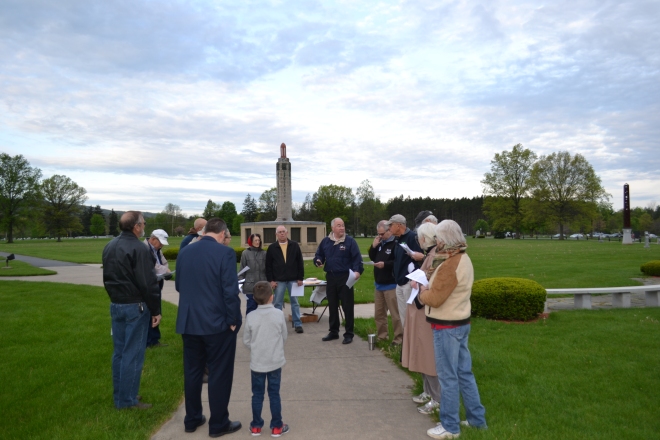 Normally we are joined by our Congressman, Glenn Thompson, but he was otherwise occupied by trying to pass a new and better healthcare bill, so he sent his assurances some members of Congress met today early to pray, as they did daily when the nation was founded.

On Monday, at 6:35 P.M. a squall line came by our quaint little village. The down-burst did, as so often happens in historical villages with old trees, take down a few trees, which luckily did not do much harm to the buildings. The trees had been for the most part been well pruned, except a few maple trees that had just done this year’s growth and were at their most vulnerable, so a few secondary power lines went down. The major problem was four poles in a row along the major road snapped, even though no falling trees were involved. How can that happen? These were wooden poles, showing their age, badly overloaded with one high voltage line on top, one intermediate voltage in the middle, telephone and cable lines galore below, placed too far apart so the power lines resonated and swayed harder and harder until the lines snapped. We lost power for one day, most lost power for two days, and power is not yet restored to all customers.

This is when it hit me during the morning hour of prayer for the nation:

We are like the four power poles, overloaded, showing signs of age, getting brittle and lacking maintenance and stabilizing supports. When a down-burst comes, we too can snap if we are not anchored properly with multiple supports.

Our nation’s power grid is vulnerable not only from an EMP (ElectroMagnetic Pulse from either the sun or a nuclear blast) but also from hurricanes, tornadoes, down-bursts, terror attacks, overloading and lack of maintenance.

Likewise, spiritually we are like the overloaded power grid. We are vulnerable to attack from all sides, and without proper maintenance of daily prayer we too are in danger of losing power.