Ms. Lerner is taking the fifth
She surely is losing her pith.
Since she lied through her teeth.
It gets hot underneath.
She’ll languish in anguish and writhe.
.
.
. 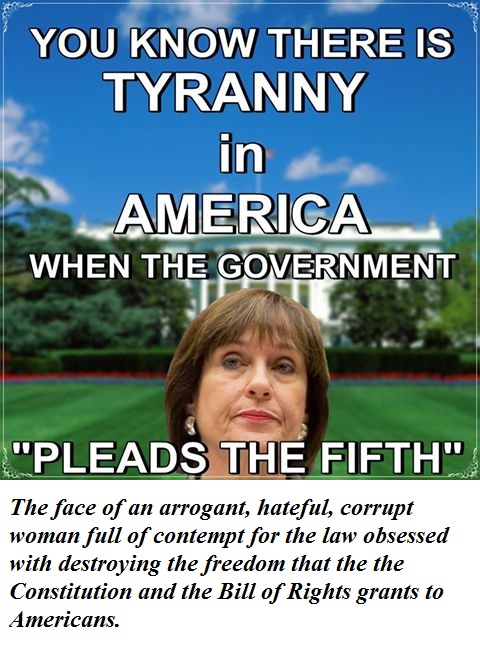 Background according to LA Times: WASHINGTON — A top IRS official in the division that reviews nonprofit groups will invoke the 5th Amendment and refuse to answer questions before a House committee investigating the agency’s improper screening of conservative nonprofit groups.

Lois Lerner, the head of the exempt organizations division of the IRS, won’t answer questions about what she knew about the improper screening — or why she didn’t disclose it to Congress, according to a letter from her defense lawyer, William W. Taylor III. Lerner was scheduled to appear before the House Oversight Committee on Wednesday.

“She has not committed any crime or made any misrepresentation but under the circumstances she has no choice but to take this course,” said a letter by Taylor to committee Chairman Darrell Issa (R-Vista). The letter, sent Monday, was obtained Tuesday by the Los Angeles Times.

Taylor, a criminal defense attorney from the Washington firm Zuckerman Spaeder, said that the Department of Justice has launched a criminal investigation, and that the House committee has asked Lerner to explain why she provided “false or misleading information” to the committee four times last year.

Since Lerner won’t answer questions, Taylor asked that she be excused from appearing, saying that would “have no purpose other than to embarrass or burden her.” There was no immediate word whether the committee will grant her request.